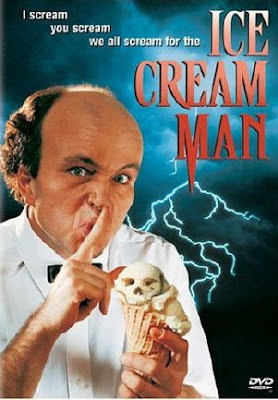 Ice Cream Man is one hell of a gem. Directed by porno movie director Paul Norman, Clint Howard plays a creepy, deep voiced ice cream man who has had his fair share of psychological problems. While it isn't 100% clear, it seems as though the ice cream man's troubles began after his beloved ice cream man was shot in a shoot out outside of his house. Not sure why there was a shoot out in that little town, why they shot the ice cream man, or why no one else thought it was odd- but sure enough it happened and somewhere along the line, Clint Howard went nuts. So begins the epic saga of Ice Cream Man.
On Wikipedia it claims this movie only received it's cult following fairly recently as many began to love it due to the "unintentional comedy". I'm sorry but if anyone was making this movie in 1995 they had to have known it was funny. Was Clint Howard really sitting in his trailer during filming reaching down to the depths of his soul to try the play the intricate character of the ice cream man? Or was he like.. ummm this shit is ridiculous. If this movie wasn't meant to be a comedy than we should all just stop living right now. Wake up and smell the farce.
So if you haven't figured it out already- this shit is ridiculous. Sleepaway Camp is still better but Ice Cream Man is about one point behind. Which of course means- that it's an amazing movie in my book. Everything is ridiculous- right down to the eyeballs in the rocky road, and the motives of Clint Howard. Logic isn't really an important thing to have when viewing Ice Cream Man- but in all actuality it makes no sense at all. Which is fine because that only makes it better.
Anyways here are some shining moments. 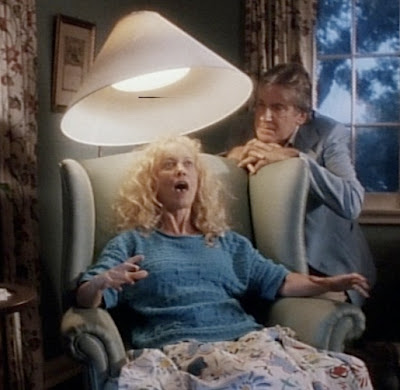 The main little girl comes home to find her Mother speaking in tongues again, rolls her eyes and runs upstairs. Some people's Mom's are alcoholics, some people's parents fight- but luckily for her, The Archangel Gabriel is watching over her house- and possessing her mother every now and then. Also, why is that lamp so big? 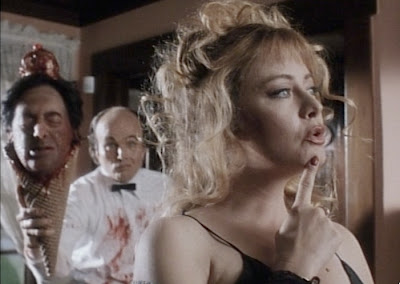 The Ice Cream man makes a special delivery to the town slut. Her lover's head shoved in a giant waffle cone. Clint Howard's face is priceless and let's not forget the poor man's face. Looks like Clint whacked off his head while he was trying to expel an enormous dump. 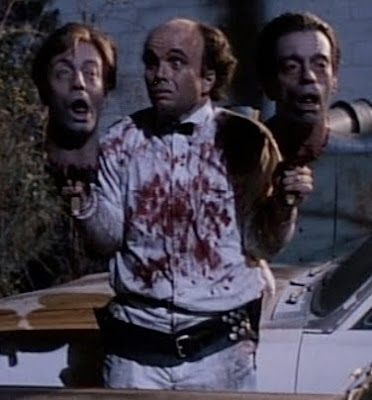 The Ice Cream Man using some human puppets thanks to those generous and completely useless cops. Another classic Clint Howard face, although I'm not sure what's going on with that belt of his...
So yeah, pretty much everything that happens in this movie is worthy of a screen shot but these were my favorites. The movie also has about a thousand spectacular lines. My favorite however is, "Whose the pied piper now, Ice Cream DICK" ...Classic!
This movie is insanely stupid, hilarious, amazing and even a little bit creepy. I haven't decided if it's creepy because Clint Howard is the ultimate creep or because there are just some genuine creepy things happening- I'd wager a guess it's a combination of both. If you ever need a good laugh just pop this one in and keep a look out for- the amazing opening scene, creepy notes of child molestation and suggestive lines that probably have double meanings, the bad padding used on Tuna to make him look fat, and the mere fact that Clint Howard is horrible at looking for people hiding in grocery stores. This movie is truly one of a kind and if anyone tries to tell you otherwise I suggest you find a new person to talk to.
This is a nice compilation of moments, although I question the usage of the word "worst" when describing them. I think they meant to say BEST.
Buy Ice Cream Man at Horror Movie Empire!
I hope someone alerted Chris Columbus to the fact that Ice Cream Man totally ripped off Home Alone right down to the theme song and the MacCauly Culkin look-alike.
Posted by Andre Dumas at 3:57 PM

My favorite moment is that ridiculous scene, where the little boy wonders "But who will bring the ICE cream?"

Hahah yes! The opening was probably the greatest 3 minutes of my life! Happy Holidays to you as well, : )

Now you have to check out Evilspeak to complete the Clint trifecta.

I remember this movie scaring my oldest cousin back in the day, hahah I like how they made the fat kid wear a pillow inside his shirt =/