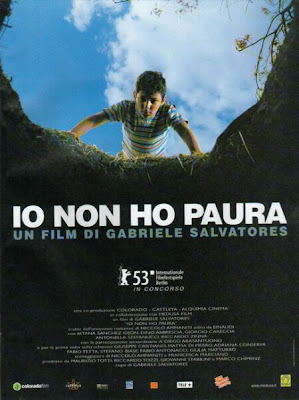 Let me be clear that I would not label I'm Not Scared a horror movie. However like a lot of movies I have reviewed in the past-this movie embodies one of the most important traits that a horror movie can have- and that is the ability to stay with you and haunt you for a long time. So there isn't any blood, or scary moments- but what happens in this movie and the way that it is presented to us allows us to see extraordinary things- things that are insanely lacking in films as of late.
Michele is a 10 year old boy who lives in a desolate town in Italy. One day while exploring an abandoned house- Michele finds a hole in the ground and a boy chained inside- looking horrid and pale. At first scared, Michele soon starts to visit the boy more frequently, bringing him food and water. It is not long before Michele uncovers a dark secret about the adults in the town- and the truth and the consequences of what keeping Filippo in the hole really means.
The plot of this movie makes it sounds kind of like Martyrs- in that parents are doing horrible things without the knowledge of their children- because they feel like it is important and necessary when actually it's awful and horrifying. But is it really about the adults in this film and their crime? I tend to think that the most important part about this movie how the children or- Michele choose to perceive the crime. It reminds me of those commercials playing these days- the one where the guy asks the girl if she wants a pony, hands her a toy pony then gives the next girl a real pony. Children know when something is wrong and what Michele decides to do throughout the course of the movie is miles away from what any adult could ever do.
There is one pretty frightening moment in this movie however- which is when Michele first discovers the hole and we get out first glimpse of Filippo. It's pretty obvious we are being set up for a scare at that part- but the camera work and the fact that there is no music and just how the stillness of the surroundings is so loud in our ears. But once that initial shock is over the friendship of Michele and Filippo is the most startling aspect of all. I often find myself wondering why movies like this affect me so much and I can't give a clear answer. But the themes explored in this movie are pretty amazing- and I'll be honest, I cried! Which is not an uncommon occurrence so don't be surprised. I'm a crybaby. Whatever.
The movie however isn't just great because of that. There are so many fantastic things. The environment and setting of the movie is so desolate and at times made me catch my breath. It's one of those landscapes that is so bare yet so filled with such an uncharacteristic life that it really boggles your mind. The scenes with Michele's sister and Michele were completely wonderful. Especially the part about how she can see a dog in the wheat field and Michele cannot. It really is a telling and perfect little scene. The children in this movie are also such great actors and I attribute this to the fact that the children are even, while being actors- embodying the innocence of children.
I read that because the movie is almost entirely seen through a child's eyes- most of the film is shot at a child's height. Little things like that just give me such an appreciation for this movie. The ending is one of the greatest endings I have ever seen- so effective and so powerful for me. I think a few people believe that the ending is really abrupt but I have to respectfully disagree- that last image is one that will hopefully never be erased from my head- it's just so beautiful and meaningful.
If I had to say something bad about this movie I suppose it would be that it at times feels very slow- but again this says a lot about the atmosphere and the environment. There is a sense of tension however and the movies pace probably can't do anything to destroy that.
If you've never seen this I suggest you check it out at least for just the extreme moments of beauty and clarity that you will experience. There is something so startling about this movie- that while it is not particularly scary in any way- it will still haunt you for a few days at least. Or in my case FOREVER.
There are no good trailers in english so this is just a video of some stunning scenes- the score is the one played throughout the movie which I also love.
Posted by Andre Dumas at 10:12 PM

Another one I may have to see...I'm definitely intrigued!

Hey, nothing wrong with a good bit of film moving you to tears!

Thanks for the suggestion! I added it to my netflix queue. The premise is so intriguing.

Awesome : )
You'll both have to tell me what you think after you see it!

I saw this film a few years ago and you're quite right to be moved. It certainly does stay with you!

A great pick for movie. It is nothing you expect and there are some very tense moments in the film.

I love this film!

You have the best taste, Andre.