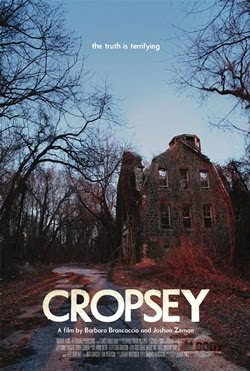 As someone who despises summer camp-the Cropsey urban legend was not something I had heard of. Not to be confused with Cropsey from the Burning, although I'm sure he was named that for this very reason- Cropsey is an urban legend developed after several children had gone missing in Staten Island in the 70s and 80s. Joshua Zeman and Barbara Brancaccio's documentary film follows the legend- and tackles one of the most startling unsolved murder cases the country has ever seen-the funny thing being, many of us have never heard of it.
I've said before that I find abandoned mental institutions to be one of the most frightening and naturally terrifying places in the world. Cropsey is like the anti-hollywood and an un-fabricated version of all those horror movies we have seen. Here we are presented with real images, and real people that only make that nightmare more realistic in our minds. The story focuses on Willowbrook a division of the mental facility that specifically housed mentally challenged children. In one of the most memorable and altogether unsettling parts of the film- Geraldo Rivera's (yes that Geraldo) first feature expose is shown. In this we get actual footage of what the conditions were like. 50 or so kids with one attendant to take care of them. Naked children covered in feces and filth. Geraldo recounts the smell saying it smelled "of filth, of disease and of death". These children were in a sense taken to this place to be hid. Mental illness in those times was something often shunned to the side- the public feared those with mental illness and this footage proves that that sort of cruelty did exist.
Now to get into the actual disappearances- we find that children began missing once Willowbrook was closed down. The prime suspect in the kidnappings was a man named Andre Rand a former employee of Willowbrook who often camped out in the woods surrounding the hospital. The circumstances seem strange and coincidental- wherever a missing child was last seen, so was Rand. But the lack of evidence was startling.
The film- while continually projecting an unsettling air of creepiness- mainly focuses on Rand and the numerous trials he was put on. It begs an interesting question about urban legends and what they can do to the public's opinion. In many ways Rand certainly seems guilty- but in others it would seem that the public used him as their scapegoat. He looked the part of a crazy, perverted child killer- so therefore he was embedded in their minds as the person responsible. The eyewitnesses are also drawn as very unreliable. Why have they only come forward- 20 years after the fact to testify? One girl claiming to be with one of the girl's who was kidnapped- was 6 years old when she saw her friend reach into a car driven by a man wearing a mask. To put it gently this girl kind of looked like a meth addict, why on earth would she only come forward about this now? She claims it's because she knows more than she did then- but honestly? These shoddy eye witnesses were not in small numbers either. It's truly a wonder Andre Rand was in the end convicted of the crimes.
Aside from all the judicial banter- the film does capture a truly memorable environment. Old lunch trays all over the grounds, the underground tunnels where Rand was said to camp out, startling video footage of a future kidnapped child in the background of a news report. It's all so real. Unlike the faux documentary of the Blair Witch Project, Cropsey is a real life and terrifying horror story. Whether or not Rand was responsible for their disappearances, it remains clear that someone had to be. The images of the missing children are something that will stay in my head for a very long time.
The film is incredibly well done- with an eerie soundtrack that echoes throughout. The letter correspondence Joshua and Barbara had with Rand was so unbelievably frightening to me- and Rand's eventual telephone call? Wow. The scene where they go to the reported area of satanic worship was also very unnerving- and my fears were appropriately echoed by Barbara who refused to go inside. These areas of possible alternative explanations to the missing children was also very puzzling to me. It is funny to see how quickly the public connect the idea of satanic worship to Rand- who probably was never involved with them in the first place.
It all really comes down to how we envision the boogeyman. The idea of someone being out there that we do not know- that has a power to evade capture and claim the lives of many, is very terrifying. It reminds me in a way of one of the central themes in The Candyman- how the public's sudden disbelief in the existence of the true Candyman spurred his actual appearance. We as human's need explanation and as Zeman says at the end of the film; "The power of the urban legend is that it doesn't claim to be the truth. It says the truth is a range of possibilities and it is the audience that must decide. So pick one"
This film is very groundbreaking in it's discoveries. It captures an honest to goodness horror story in real time and with a 100% true story. You won't find screaming documentary filmmakers or little sticks strung up in trees- but you will find something that will stick with you for a very long time. Please check out the website to get more information and to buy the movie. It's well worth the cost to help out an independent film that is sure to continue to make waves.
Posted by Andre Dumas at 10:56 PM

Wow.
Great article, and that trailer definitely has me wanting t see this film (the piano score cinched it). The photo of him with the spittle coming out, and those whacked out eyes-this looks scary as hell.

Great post and loving the blog! I love the sound of this one, I'll be looking it up!

Awesome post. The directors will def see some extra sales as a result of it.

Very cool! I definitely want to see this.