The Host: It's true! An Asian Horror Movie That I Love. 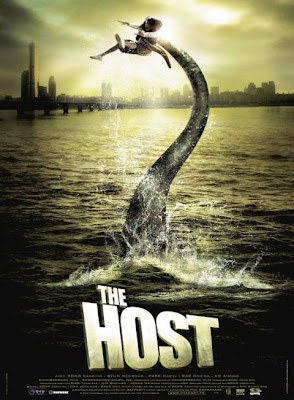 Well I've done it. I've found an Asian horror movie that I can really get behind and support. And the best part is- I've been avoiding this movie for months! This isn't because I didn't think it was going to be good but rather I have a terrible fear of monster movies involving monsters in the water. Jaws obviously is the cause of this fear- so due to this I cannot watch "water" movies (Yes I even closed my eyes during the The Water Horse preview) OR go on whale watches. I just really hate that surprise moment of something popping out of the water, it sets me into all kinds of epileptic shocks and it's just no fun for me. But after hearing endless amounts of praise for The Host and because I felt so badly after not loving Ringu I decided to give Asian horror one last shot!
After gallons and gallons of formaldehyde are poured down the sink, a fish mutates into a gigantic beast in the Han River. On a sunny day down by the river, Park Gang-du's daughter, Hyun-seo gets taken by the monster- and he and the rest of his family make it their goal to seek their revenge on the monster and if possible, save Hyun-seo.
The opening scene of the movie is perhaps one of the greatest I have ever seen. I know I've said that about movies like Ice Cream Man but this time, I really and truly believe it. Just seeing the monster swinging under the bridge like that was insane. Then the unexpected happens- after a few harmless beer cans and food throwings into the river the monster disappears and people begin to wonder just what it was. Then our hero, Park Gang-du stares wide eyed down the river and we see the monster- charging down the cement path and knocking and grabbing humans at it's will. It was very unexpected for me. Here I am closing my eyes thinking that this great beast is going to fly out of the water and attack the people when it just defies everything I thought and proves that it is one amphibious and fearless monster. Every thing that happened in that scene made my jaw drop- from the attack on the trailer with all the kids trapped inside to the ultimate most fantastic shot and moment that ever happened... 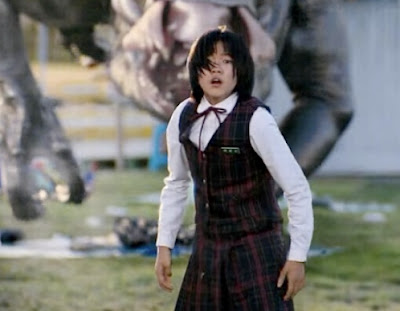 God I really fucking love this. That scene in particular was like life changing to me. Perhaps I'm over reacting but everything in those few minutes was so perfectly done, it truly was.
Actually, the movie is just filled with those kinds of unexpected and fantastic images and scenes. I loved all the dusty bottles of the formaldehyde in the beginning, foreshadowing a terrible and costly mistake. The scenes of understated comedy- the hazard suit guy tripping and pretending like nothing happened, Park Gang-du scratching his balls, Hyun-seo saying she craves an ice cold beer when seconds later a fizzing can falls out of the creature's mouth. All of these moments were fantastic- and they were in turn coupled with moments of really powerful and startling fear. The monster's regurgitation of all the human bones- proving that yes he does actually eat humans and the look of fear and revulsion on Hyun-seo's face. The relentless searching for Hyun-seo through the miles and miles of the sewer and the ultimate sadness that happens with Hee-bong's death as well as the ending scene. There were just too many great moments!
The film is extremely long however at 2 hours and that of course is one of my biggest pet peeves about horror movies- but I can't really complain because I did find myself enjoying almost everything that happened. I loved Nam-joo's character and was just yelling and yelling at her to use that damn bow and arrow- and use it she did! 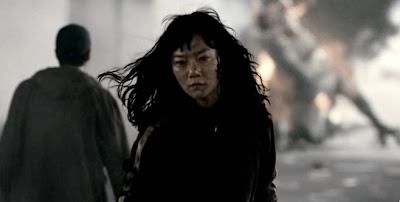 That was possibly my favorite moment....although every scene that that little boy was in was also my favorite so I just can't decide!
Ok and one embarrassing thing that I really don't want to admit but I guess I'll just do it is- I totally thought Gang-du was Hyun-seo's older brother for probably the first hour. Yes I know Gang-du refers to her as his daughter and so and so as her Aunt and what not- but I honestly thought some translation or culture thing was happening and I guess I'm just an idiot. But really, they couldn't have done a better job making Gang-du look immature and lazy I guess. Which actually brings up another startling part- at the end when Gang-du has normal hair and is wearing normal clothes- it's like you can see everything that has happened to him just read on his face and throughout his body. I was blown away by that transformation and just found it so fitting and so perfect.
All in all, a really spectacular movie- from beginning to end. I'm not a huge lover of monster disaster movies or Asian films obviously- but I really found myself absolutely loving this. There is an endless supply of great things happening throughout the course of the movie and I couldn't have thought of a better way to spend my Boxing Day. God Bless The Host!
Posted by Andre Dumas at 6:10 PM

Absolutely loved this and should watch it again soon.

There is that one perfect moment of silence where the young girl is listening to her headphones...

Great. You finally like an Asian horror film and you pick one I don't like much. lol

Glad you dug it though.

I may have to get this one again after reading this! Glad you liked it, and yes, that monster attack scene is so jaw-droppingly great.

Good luck getting in the water when summer rolls around!

Gory nooo! Why didn't you like it much? It is odd I suppose that I would like this better than Ringu or some of the other more atmospheric kinds as that is certainly more of my style but I don't know I just really loved this...

Dod- I DO not swim in the ocean which is funny because I'm from Cape Cod. I just douse myself with my water bottle....haha. Lakes and ponds I can handle but tend to avoid due to floating poop and whatever else may in there...like...giant mutated fish.

This made me happy after seeing Clovercrap.

Now this is an awesome monster movie Hollywood can only imagine making.