Lady In White: Creepy Due To Nostalgia or Genuinely Creepy? 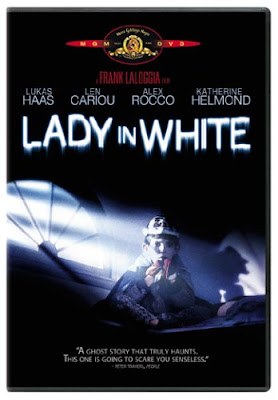 Movies like Lady in White truly make me wish that I had seen them as a young pup. Even I, at 23 years old find the images in the movie creepy- but I can only imagine what I would have thought of them if I was younger. It is nice to see however that nostalgia isn't this films main draw- and that what it achieves through it's atmosphere and startling images can still be regarded as creepy today- at least to my standards.
At it's heart, Lady in White is a perfectly creepy and classic ghost story. We meet Frankie- who after being locked in his school's cloak closet by two bullies- sees the ghost of a young girl get killed. Soon after the attacker returns to the closet and begins looking for something in a grate ignorant of Frankie's presence. Once a rat crawls into Frankie's pants however it's all over- and the murderer tries to kill Frankie. During his time in limbo, Frankie speaks with the ghost of the girl who begs him to find her mother. Frankie is revived seconds later, and the school janitor is blamed for the incident as well as string of child murders from the past. After frequent visits from the ghost girl, Frankie decides he must figure out the true identity of the killer and find a way to reunite the ghost with her mother.
I thought the movie did a swell job of doing a nice whodunit/ ghost story thing- but what I really gravitated to were all the images of the lady in white. An all too creepy and ominous presence that always seemed to send chills down my spine. Here are two of the most startling scenes. 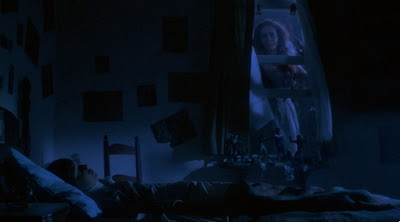 The lady in white hovering outside of Frankie's window at night- very Salem's Lot and very very scary.
and 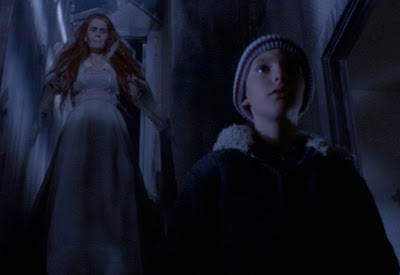 The scene where the lady in white floats down the stairs after Frankie during the lizard hunt.
Both of these scenes had me doing that awesome thing where I went "ahhhhh" in feigned fear- but in all actuality I was pissing my pants. It's just a well done combination of overall creepiness and classic scare moments. When you are walking around in a creepy apparently abandoned house you don't want to meet her walking around right? Right! There are of course plenty of other scary moments- when Frankie is trapped in the coat closet and sees the ghost's murder, the realization of who the killer actually is towards the end, and of course the very very creepy and uncomfortable archery scene...bleck.
The other great thing about this movie was how it seemed to be a combination of all of my favorite movies. We have; A Nightmare on Elm Street- a child rapist/murderer, To Kill a Mockingbird-a scapegoated black man wrongly accused and wrongly killed for his crimes and a father trying to right the wrong, and then of course, the greatest movie ever made, That Thing You Do- because well, Sol Siler plays Frankie's dad. I don't know I guess the movie just took me back to the days of good old fashioned ghost stories. Whether the movie scares you or not- you can't deny that it has something inherently creepy about it.
The movie isn't fantastic by any means- personally I think the Lady in White side plot was kind of non existent which is strange because it is the movie's title after all. Maybe not her presence but how she fit into the overall story was kind of misleading and not as cool and important as I thought it would be. Also, there were just way too many seasons and holidays represented for my head to process! I was going nuts trying to figure out if this was more of a Halloween movie, a Christmas movie or just an ugly sweater pub crawl movie. Too many choices!! Oh that and the older brother kind of weirded me out because he was always tackling and pinning his brother down and making some strange remark about how beautiful his eyes were or something I don't know.
Other scenes and moments I loved- the very shocking moment of the mother "apologizing" to the janitor after he had been released from jail. When the killer does that special Scream like move of disappearing under the car and popping up somewhere unexpected- like the Trunk! It's always the trunk! and of course- the numerous scenes of the ghost girl being eerily lifted away and carried by an invisible force. Something about that just made me feel so creeped out...
So- a wonderful little gem from the 80s that I had never heard of but many of you probably have. I'd imagine this movie still is mostly praised due to it's nostalgia factor- but I can very much say that it's still something to appreciate as we move further and further into the era of cheap thrills and remakes.
Buy Lady in White at Horror Movie Empire!
Posted by Andre Dumas at 8:45 PM

Definitely one of the most creepy and atmospheric horror movies of the 1980s. This was an era when it was ALL about the gore and splatter, and this movie was a reminder of what it takes to make a genuinely frightening horror flick.

I actually was lucky enough to see this on video when I was a little kid back in the '80s. It WAS totally creepy, but to some extent it lost a bit of it's scary appeal as I got older. There were definitely several images that burned into my mind and scared the crap out of me as a kid though. Thank you for paying it a nice tribute!

I saw this on HBO when i was a kid and really liked it,and the use of that creepy song was pretty effective .lukas haas needs steady work!

I saw this movie when I was 7. I was so excited to see it and when I finally did it FUCKED ME UP! I cried as soon as it was over, and other than The Shining it is the only movie that shook me to the core as a child (and I saw pretty much everything). However, nostalgia isn't everything. I bought this on DVD a couple of years ago and I can't bear to watch it. Watching it now, I find it to be ludicrous. It is so cheesy and corny that I can't even get into it for old-times-sake. I probably have the minority opinion on this. I may give it another shot some time, but I certainly have had a very different experience now than I did twenty years ago.

I saw this when I was 7 and I was so excited to see it, and I'm not really sure why. When I finally did see it, it FUCKED ME UP! I started balling as soon as it was over. Other than The Shinning it is the only movie that shook me to my core as a child (and I saw pretty much everything). I bought it on DVD a couple of years ago and it wasn't the same experience, nostalgia certainly has a shelf life because I couldn't bear to watch it. I think it was cheesy and insufferable. I may give it another try at some point, but I can hardly appreciate the experience I had twenty years ago.