Inferno: No One Told Me I Could Take MY Cat To Class. 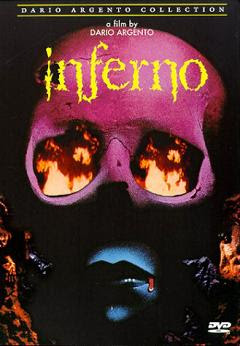 Being the second installment in the Three Mothers Trilogy after Suspiria, Inferno has some enormous shoes to fill. Unfortunately I don't think any Argento film will ever affect me the same way that Suspiria did, but Inferno certainly has it's moments.
Inferno delves further into the story of the Three Mother's quoting from an old book, giving details about what each sister or mother looks like and where they live. We find that Mater Tenebrarum the Mother of darkness- is the cruelest of the three- The Mother of Tears is the most beautiful (obviously since she has to walk around naked all the time), and The Mother of Sighs is the oldest of the three. So for half of the movie we follow Sarah around, a girl living in New York who discovers that the building where she lives may be harboring some dark secrets. Once she kicks the bucket- her brother Mark comes to New York after receiving a letter from Sarah. Soon Mark becomes caught up in the same dark secrets and is left to rid the world of the 2nd Mother.
Now first off, I want to say that what I love the most about Inferno, is that it creates a very similiar nightmarish- environment that Suspiria did. I don't know if it's just me- but I used to have these dreams where I would discover a whole other, undiscovered part of a house. The undiscovered part would seem to stretch on forever and around every corner that I took I felt myself get more and more anxious. This is exactly how I felt during most of Inferno. That scene in the beginning where Sarah discovers the underwater ballroom- is one of the most amazing things I have ever seen. There's just something so eerie and beautiful about it that it just makes my head spin. More nightmarish than beautiful- but equally awesome to me is when Mark discovers the way into the secret floor of the building. I just can't put my finger on it but those two scenes really wowed me. I'm sure it harkens back to my old dreams but those two scenes always make me wonder why Inferno isn't talked about more...
And then I remember a few things. The character of Mark is boring and extremely uninteresting. Nothing he does makes me worry for his safety and I almost wish Sarah had just stayed the principle character. The movie also at times tend to get a bit slow, deaths aren't as exciting and creative as they were in Suspiria- and any characters we grow attached to seem to kick the bucket shortly after. OH and also, a mean old man drowns a bunch of cats in a bag (!!) and the ending reveal of the Mother of Darkness is one of the most laughable I have ever witnessed. Maybe I'll spice things up later and show a picture of her.
Now this isn't to say I don't like Inferno- because if anything, another viewing of this movie has turned me onto the fact that I really appreciate this movie more than I thought I did. Nothing can really live up to Suspiria and in the case of The Mother of Tears sometimes you can crash bitterly like a baby being thrown over a bridge, but Inferno does a pretty swell job in my opinion. Another thing that tickled my fancy is that movie really stayed true to those same nightmarish colors we saw in Suspiria. There are instances of this crazy purple and pink kind of glow, and of course the signature blood red walls. I also loved the bloody handprint on the white curtains, and that one scene where that guy was spitting blood all over the place. The rat death scene is debatable- pretty gruesome but at the same time I'm always just too upset over the drowned cats to really give a shit.
Overall I think Inferno gets looked over a lot- but there are a lot of truly stunning things happening- as well as some truly awful things. If you haven't seen in this in a while I would suggest giving it another look. If you've never seen it- do not watch it right after a viewing of Suspiria or you'll just feel sad on the inside. And if you're going to watch it alone don't get too scared when this happens.... 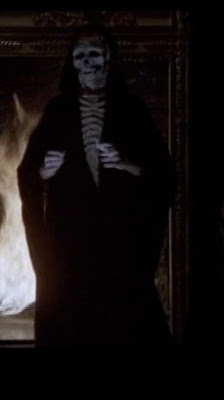 Ahhhh it's too scary I can't take it!! Rubber skeletons leave me alone!
Posted by Andre Dumas at 12:12 PM

I have mixed feelings about Inferno, too. I did watch it shortly after I discovered the brilliance of Suspira so I guess my expectations were set far too high.

The one thing about Suspiria is that (along with Opera), it's Argento's most logical narrative. Inferno is quite the opposite as I recall. I just remember saying "what the fuck?!" like 100 times while watching it. I guess I hadn't quite grasped the Italian horror idea of "horror through imagery, not plot".

Completely agree with you about the underwater scene though. I haven't seen it in years but it stands out in my mind as one of the most surrealistically beautiful sequences I've seen in horror.

But what about that rats scene - "The rats!!!" Ridiculous.

Maybe it's time for a re-watch. If I can stop leaving profoundly long blog comments, that is.

No doubt the rat scene is ridiculous. But as I said in my review I'm always more upset about the cat drowning! I'm sensitive to cat deaths!

I think this plot may be more understandable if only for the fact that nothing really really ridiculous happens. I still don't get that scene with the scary guy in the basement of the library in Rome, or what the lady who started the fire was all about though. But it's very very true that it's all about the imagery and less about the plot. I stopped questioning things after my 3rd or 4th Italian horror film.

But I think you should watch it again! Some things will definitely surprise you I think.

Good lord, do I love that underwater ballroom scene. So freaking scary and wonderfully shot!

I need to watch this again soon and I might have to give Mother of Tears another shot now that my expectations are back down to a normal level.

A triple feature might be in order would it not be the fact that Suspiria ruins them all by being so freaking great.

Sorry, but i really thought inferno was a bit shit. and this is coming from, perhaps literally, the only person at this year's Fright Fest in London who thought that Giallo was the best film of the festival.maybe i should watch it again. i was watching an awful lot of italian horror at that time. but there's no way it's even half as good as Tenebrae, or even Phenomena for that matter.

Chris- Sometimes I think that I need to give Mother of Tears another shot too but I truly believe that no matter how many times I watch I will just not be a fun. I don't knowww......it's tough, it really is.

Robert- I completely understand because I could barely make it through the movie after my first viewing. But I don't know what happened between then and now- maybe I was just really excited about the delicious Panera sandwich I was eating at the time- but I really felt intrigued.

As much as I enjoyed Tenebrae and Phenomena they do not project the same kind of nightmare quality that Suspiria and Inferno do. Inferno certainly has it's flaws but I could see that it was related to Suspiria and perhaps that evoked the sudden interest I had in it. Granted it is basically just those 2 scenes that I felt the nightmare quality but it still filled me with a sudden appreciation that I felt had previously been non existent.

My reaction to it was similar to yours, at first I didnt know what to make of it, but watching a second and third time, I realize I really love it.

This was one of those Argento films where colors completely take over to create the spooky nightmarish atmosphere.

Its a worthy sequel to Suspiria, but its different. Its more abstract and surreal then Suspiria. Mother of Tears was such a disastrous dissapointment, it made me realize without a doubt in my mind that Argento has defenetly lost it.

Phew! I was beginning to wonder if I was the only person in the world to enjoy Inferno! It is a lot more abstract than Suspiria you are very right- and I think that definitely tends to rub people the wrong way especially since they might not be expecting it.

The scene that always makes me scractch my head is the one with the hot dog vendor that suddenly turns into a killer! That was insane! Almost completely non sensical, but then, I read somewhere that these crazy things happen in the film because the witch is making evil things happen in the city.

The same thing happens in Mother of Tears, where random acts of violence begin to occur in the city for no apparent reason, but its all because of the witch, whos making it happen.