The Texas Chainsaw Massacre 2: Congratulations Leatherface, You Are Now a Vagina. 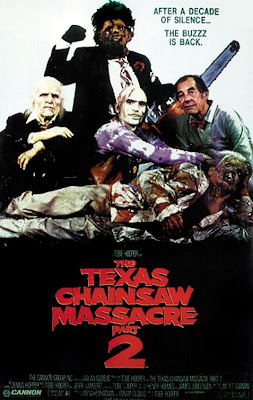 The Texas Chainsaw Massacre part dos is a very perplexing review for me to write. While I can appreciate most of it for it's more obvious horror comedic tone, the detailed underground sets, and the wonderful special makeup effects by Savini- I still end up mostly hating this movie. I think this has to do with that fact I truly loathe Stretch and get really annoyed by her screaming and by Otis B. Driftwood I mean Chop Top's character- but I'm not sure. So let's talk about it.
Dennis Hopper plays our good friend's, Franklin and that other girl's Uncle Lefty- who for some odd years has been trying to solve the murders of several missing people- apparently killed by chainsaws. Eventually he is led to the house of our favorite twisted family- now a carnival themed house littered with bones and human meat and also doubles as a human meat chili factory. Lefty, armed with chainsaws starts destroying the house and seeking revenge on the bastards that dared cut open a fat guy in a wheelchair. Oh and there is a DJ named Stretch. And she sucks.
I actually really like the opening of this movie. When half of that guy's head gets sliced off, it really is pure and enjoyable entertainment. It was also surprisingly original and even a little on the creepy side- what with Leather Face pretending to be a decaying skeleton and all. It's very true that I found myself getting unusually excited when this part happened- and then unfortunately my excitement withered.
I know that this movie isn't suppose to be an exact sequel to the first. When most people talk about why they hate this movie it usually has to do with the fact that they feel it so far removed from the first that it's almost insulting. The problem with that critique is that sequels aren't suppose to be the same exact movie that the first one was- and if it is it usually bombs due to the fact that- well, it's the same exact movie. The gore and comedy is over the top yes, but a lot of people forget that Tobe Hooper intended for the first to be funnier than people actually thought it was. TCM 2 is an opportunity to do more things with gore and with humor and I do respect that. My reasons for disliking this movie have more to do with specifics.
I will start with Leatherface. The actor in TCM 2 looks about 3 feet shorter than the first. I may be thinking of something else but I'm pretty sure they had Gunnar Hansen wear shoe lifts in the first one which made him much more menacing and terrifying. He was so much more of a presence in that film. He was the ultimate- terrifying, historyless bad guy that still to this day makes me feel a little uneasy. In TCM 2 Leatherface has apparently shrunk and gained a conscious. Stretch becomes his psychiatrist and "talks" him through things. His feelings get in the way of his killing spree and he leaves Stretch alone and almost helps her survive. Give me a break! The day Leatherface starts showing some compassion is the day I will start liking Twilight. It just can't happen. So I'm just going to pretend that it didn't. I also hated how he HAD to do the "Leatherface Jig" everytime he wielded his chainsaw. It got so old and ridiculous looking.
A lot of people have a serious love obsession with Bill Moseley. Some people have orgasms just by hearing his voice. I will never be one of those people because TCM 2 has reaffirmed the fact that I just find him to be annoying. His Otis B. Driftwood character from House of 1000 Corpses and The Devil's Rejects was basically just a reincarnation of Chop Top. Yes we get it, you're a crazy son of a bitch who says silly things and likes to kill people. I am just over it and I'm sorry to all you Bill Moseley worshippers but I'm just saying how I feel OK? Don't hate me.
Stretch. Overacting 101. I know to be tied down at the dinner table of a cannibalistic family you have to be a little terrified and maybe even a bit hysterical-but every time she opened her mouth and did her "AHHHH OH MY GOD OH MY GOD" scream I seriously wanted to kill her myself. It was so agonizing and awful to me. Every single situation she was in- was awful. Keep in mind it's her own fault she followed them to their house and got stuck in that mess in the first place. I also really honestly cracked up when she was at the radio station and Leatherface was taking a chainsaw to the bin of sodas. 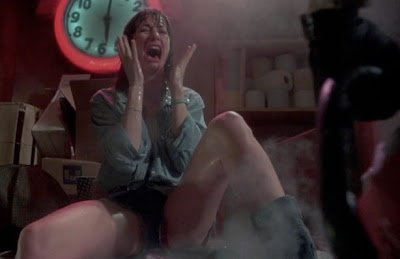 NOOOOO NOT MY SODAS!!!!!
Man, I am just not into her. Also how did her colleague guy survive getting smashed in the head about 30 times with a hammer? Can someone explain that to me.
I did sort of enjoy when Leather face put the gross skin mask onto her face to "save" her and then started dancing with her. That was pretty hilarious. But then again she is still the most miserable human being to watch in the movie so it didn't really help things.
There were plenty of other things I didn't enjoy like. how the ending was unusually abrupt for a movie where so much happened previous to that. We get that great chainsaw battle and then a grenade gets thrown and we don't see the aftermath? It all seemed very strange to me. I also thought Dennis Hopper was pretty lame. If you are going to seek revenge just find those bastards and slit them open with your chainsaw. He wasted so much time doing absolutely nothing. Does he even remember he played this part? It's very random. He tries to pull off this whole dark cop- searching for an answer to his nephews murder thing but it just doesn't work. He does have that whole touching moment with Franklin though... 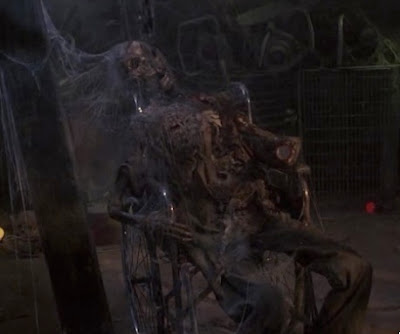 But PS how do we know that is actually Franklin when we see THIS skeleton later. 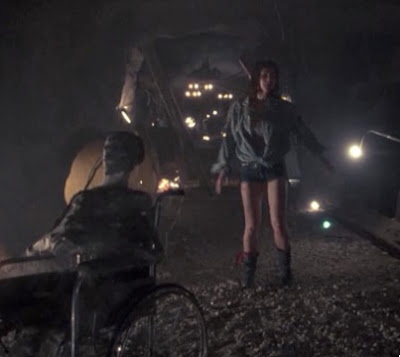 Yeah...pretty fishy. Who knew 2 guys in wheelchairs would somehow roll their way into a random part of Texas and both be slaughtered by the same crazy family?
The final problem I have, although it's less of a problem and more of a general question- is why does their house change so dramatically? Where did they find the funding to turn their house into a dead body carnival? From winning chili contests? I guess. It was all just a big question mark/ ellipsis to me.
Like I said, I do appreciate this movie for different reasons. I do find the whole atmosphere to be very nightmarish and it reminds me of that movie Nothing But Trouble with Chevy Chase. All the bones everywhere and random hunks of flesh hanging up- it was pretty dreadful. But overall I just don't love this movie. It's a very different movie from the first TCM so I don't feel that I can compare it to that- but there's just something about it that I'm not sold on. Again I blame this on Stretch but who really knows these days?
Posted by Andre Dumas at 3:42 PM

Is it bad that this is actually my favorite one in the series? :(

That "I'm the Lord of the Harvest", "Who's that? Some new health food bunch?" exchange gets me every time.

I think it has a lot of funny quotes actually lol

Haha no it's totally OK! I didn't say it was a bad movie I just said I didn't like it..there ARE several funny lines- which reminds me that I meant to put a few of my favorites at the end...drats!

I hated this movie for years. But I saw it at the horror marathon at the coolidge this year and I kind of dug it on the big screen. Some good gore. Dennis hopper. And that great scene where Leatherface puts the skin face on her. Ah, young love.

At Coolidge!? Are you from Boston too?

Yeah, I live in brighton. I've been lurking on your blog for a while now. Good read. Keep it up!

Oh awesome! There are some possible exciting horror events in the Boston area I have planned so keep an eye out.

Nice, will you be posting them here?

Yup! Hopefully things will happen- right now it's a highly possible happening and at Coolidge nonetheless.

I was always mixed about this movie, too. I mean, there's Dennis Hopper being...Dennis Hopper, and I actually liked his character. But I am so on the same page about Stretch. I could not muster up a lot of sympathy for her, to be honest. I was more interested in Hopper's character.

Another great review, Andre! The title alone had me laughing.

Hm, I'm not far from Boston either, so any good events might be easy for me to get to. Always down for a good road trip.

TCM2 is definitely a nostalgia film for most horror fans, I think. I love and have always loved this movie, but I can see someone not liking it so much when seeing it for the first time as an adult.

Stretch is wicked annoying to even me and the movie is ridiculous, but it's sleaze at its cheesiest. It's so bad it's good and it's almost self aware of this fact.

Good review and it's interesting hearing the perspective of an adult horror fan seeing this for the first time, but I will say, whether you like him or not, Moseley is wicked good in The Devils Rejects!

Matt- I can totally see myself liking this a lot had I seen it earlier and maybe in my youth. It's kind of like The Gate in that aspect. I did realize it was a so bad it's good kind of movie though. As for Bill Moseley...I suppose he was OK in the Devil's Rejects but I still don't like his all too familiar sick twisted sort of redneck character persona. It makes me wonder why he wasn't cast in Wrong Turn. He was waaaaay better than Sheri Moon though. I guess I'm just bitter over the Leatherface gone soft aspect....boo.

They got their money from chop tops VA checks if you did your homework n research you stupid wanker. That how they bought the place dumb f$&k. And Franklin has a chainsaw cut through his skull if you look dumb wanker. Maybe before you bash a movie you should watch it and do research to understand it. Wanker.