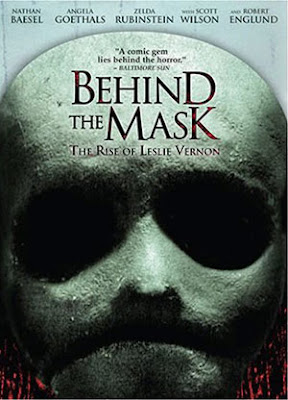 I must say I really enjoyed this film. It really spins the horror movie convention on it's head and delivers a very satisfying bit of entertainment. Filmed in a mockumentary style- think "Best in Show" or even RENO 911!, Behind the Mask tells the story of a man trying to rise to fame as a serial killer. The documentary is filmed in a place where killers from horror movies, namely Jason, Freddy and Michael are all real people with accomplished death totals.

3 College students set off to make the documentary and the entire process is very well done. It's all rather natural and the comedic timing by most characters is perfect. Leslie Vernon is funny and surprisingly so is the lead girl who you may recognize from a small role in Jerry Maguire.

Leslie takes the crew through what his murder spree will look like. Finding his "survivor girl" Kelly, and plotting out exactly how the murders will go. He goes through the elaborate mechanics of sawing off tree branches so if the victims try to make an exit out the window they will fall, as well as sabotaging the old weapons in the shed so he can't be killed by them.

Once Taylor and her crew witness the first killing they become horrified and Leslie gets angered at their emotional attachment. He makes them leave and tells them goodbye. Taylor has a change of heart and realizes she cannot let the kids die. Here they put the cameras down and the movie switches to real movie style, where I'll keep the rest to myself because it's extremely entertaining.

If you love horror movies this is a good choice because it brings together so much of what we love and know. See if you can spot all the different homages to certain favorite and famous horror movies, as well as some cameos from a few different horror movie characters.

There are so many great lines in this that I couldn't help but laugh out loud. There is gore but it's not over the top. Overall it's a great movie that gives another dimension to the character "behind the mask" as the title suggests. Check this one out and tell me what you think. Don't be mislead by the trailer, it really has much more fun and laughs than terror.

BUY this at Horror Movie Empire.com!
Posted by Andre Dumas at 8:28 PM

This is a great, unappreciated movie. It does a great job breaking down the elements of slasher movies. Also there are some great cameos: Robert Englund, Kane Hodder, Zelda Rubenstein (RIP). It was also filmed near me.

I really enjoyed this movie as well. I hope that one day it will become a bigger success and maybe even spawn a few sequels cuz I would love to see more of Leslie. If they just leave us hanging after that clip during the credits... it would suck.

I know that I SHOULD like this movie, but I really couldn't get past the fact that if they released a documentary of a murderer, they'd all be accessories to the murders and go to jail or something. I didn't get it at all, and I know, I should suspend this disbelief, but I couldn't work past it. It just didn't work in the brain of my mind. Also - the lead girl is from HOME ALONE! Booyah. Points for that, I guess.