The Evil Dead: A Splinter in the Va-Jay? I'll Pass. 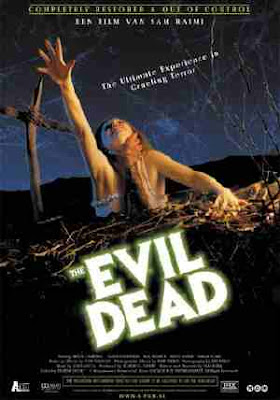 The Evil Dead may be the first actual case of "Cabin Fever". Nothing says fear like being trapped in a cabin with all your friends who one by one get turned into evil gross milk spitting demon things AND nothing will ever say fear like being raped by a tree. Everyone loves the Evil Dead trilogy- at least I think they do. It is a pretty wild ride filled with lots of blood and guts and great moments so I suppose it's understandable. I still enjoy Suspiria way more but who can really top that?

So Ash and his pals, and his ugly sister take a nice little trip to the mountains and stay in an old cabin. When they arrive they find a basement that contains a gross looking book filled with some pictures of demons and skeleton things and a recording. When listening to it the man talks about finding the so called book of the dead, and how when after he read the incantation evil beings came and took his wife. He says the only way to get rid of them is by dismemberment and says that soon he too will be taken. So they have a good laugh and listen to the recording of the incantation- bad idea. And Ash's sister Cheryl gets freaked. After hearing something in the woods she goes to investigate. I'm not sure why you would ever want to investigate a strange noise in the woods- especially after get freaked out by listening to old creepy records of spells but oh well. So she goes and then the trees come alive and rape her.

After she runs hysterically back into the cabin everyone tries to calm her down, she tries to leave, it doesn't work out. Then she suddenly becomes an even uglier version of herself and stabs a pencil into Ash's girlfriend's ankle. They lock Cheryl in the basement and try to figure out how best to proceed. Then one by one they start turning and trying to make the others "join them" Ash soon is the only one left and he must defeat the milk spewers for good.

So I think that in the moment when Cheryl first becomes a zombie thing is probably the scariest. It's pretty unexpected. She's just looking at the window while the two other girls are playing some mind-reading game, and she just starts calling out the real answers with her head turned away from them. Her voice is shrill and when she turns her face around it's pretty terrifying. I mean lets be honest she was pretty ugly before but now it's just.....ugh.

In fact the demons' faces are so gross you barely need all the blood and guts to gross you out. They have these sick mitt like hands that look like they are constantly decaying and uggh. And when they get stabbed they spew out blood and milk. Yuck.

the other best moment is when Ash's girlfriend turns into a demon. She has this terrific evil little girl type laughter that just really makes you feel uncomfortable. And the fact that Ash doesn't have the courage to dismember his friends after he stabs them really makes you angry. THE GUY ON THE RECORD SAID TO DO IT ASH STOP BEING A GIRL. That's what I scream every time anyways.

So all in all it's a classic movie. So much blood so much gore it's a feast for the gore lovers. There are some parts when I get a little bored and when you just get a little annoyed that these demon creatures just won't go away but for the most part it's a great movie and extremely entertaining. It's definitely a staple in any horror movie fan's repertoire so check it out if you haven't seen it.
Buy The Evil Dead at Horror Movie Empire

For me The Excorsist is the greatest horror ever made. The Evil Dead is second in my opinion.
I saw it in 1985 and it was the scariest thing I'd ever seen, and even today even though it has dated is terrifying.
It is the film that all horrors that came after it set the standard by, and deserves its cult status.

How can you call Ellen Sandweiss ugly? Anyway, A great review of one of my favourite horror films. First saw it when I was ten and it scared the shit out of me. Watching it now, and having listened to the 2 commentaries, I find it more funny than scary. Just found your site and I have to say I love it.