Shiver: I'll Take Dying From the Sun Over Being Maimed by a Poop Covered Wild Child Any Day. 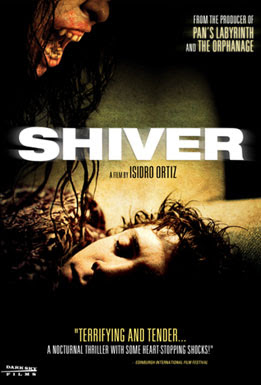 OK so maybe this movie kind of reminded me of Twilight and I HATE Twilight so that got me a little angry, but when all was said and done it wasn't so bad. Yes yes it's another spanish horror movie- but this one isn't an artistic masterpiece like the others, it's really just a regular good old fashioned horror movie.

Santi is what you would call a modern day or real life vampire. He has photophobia and cannot go into the sunlight. He also has unfortunately long canine teeth which are definitely a nuisance once people turn up in the woods with their throats slashed and blood drank. So he and his mother move to a small town in the mountains where there is very little sunlight. And like I said people and a sheep are getting killed by some strange creature in the woods. Santi is always around when the murders happen and it is not long before Santi catches a glimpse of the beast itself. It looks like a child in dreadlocks covered in poop. Oh- and it has scary teeth. Soon Santi realizes he has seen this poop covered beast and tells everyone that she is the little girl who lived in his house before him. After some research Santi discovers that Erika was a "wild child" lost in the jungle and raised by animals. Now Santi must prove to everyone else that he isn't crazy before the wild child can get her hands on him.

So there are a few pretty decent thrills in this one. The part when Santi hears his door open and you think it's his Mom but it's the wild child is pretty scary. Not to mention the first glimpse we get of the wild child, and all the end sequences with the flashbacks. The last scene however was a little anticlimactic. I'm also not sure I really follow her whole deal though. For instance, why do her eyes glaze over sometimes and sometimes not? Is this in relation to the gecko's eyes? But what does she have in common with the gecko? Some of it is just a little strange and unexplained and I find that hinders a good horror movie.

So besides this movie looking like Twilight it wasn't so bad. It kept me entertained which is good enough for me, but it also wasn't anything special. I guess the only reason I stayed watching till the end was so I could get answers about this wild child- and of course the answers were a little fuzzy.