Jeepers Creepers: Darry Has Possibly the Worst Tattoo in the World. 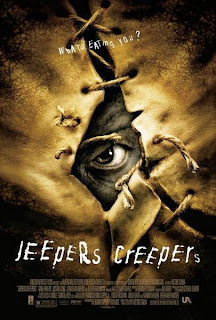 For some reason I feel like a lot of people don't like this movie too much. I don't really have a problem with it, but I do tend to enjoy the beginning more than the end.

Trish and Darry are brother and sister driving home from wherever they live. While on a rustic road a scary, beat up old truck comes racing up behind them, and tries to run them off the road. After barely escaping, the truck moves on and Trish and Darry are shaken up but proceed. While passing an old church, Darry sees the man from the scary truck throwing what looks like a body wrapped in a blood stained sheet down a pipe. The man looks at them as they pass and follows them in his truck again, trying to run them off the road once more. After he passes, Darry convinces Trish to go back and figure out what the man has been doing.

Darry gets into the pipe and falls into a cavern type thing. Looking above him he sees hundreds of dead bodies sewn together. In a panic Darry escapes and tells Trish they have to go the police right away. They soon find that the "man" is not a man at all, but a demon who gets to feast on humans taking various body parts as his own. Obviously no one believes them so once the police are a bust they must take matters into their own hands.

Long story short, Darry gets taken by the demon and flown to an abandoned factory where the demon rips him in half, and takes his eyes, with Jeepers Creepers playing in the background.

So I think the beginning is fairly well done. There is a sense of unknowing because we aren't sure what we are up against. We assume the driver is some kind of man just killing people. It's all very suspenseful, with the sense of not knowing if he will come back and what not. The scene with Darry going down the pipe and finding the bodies is very creepy, and there's that moment where Trish is keeping watch and we think the demon's truck is racing towards them. That's other thing that is scary about this, is the demons truck. It's like some beat up old ambulance type thing and I don't really know why, but it really freaks me out. I guess that may be saying something if the truck is scarier than the movie but oh well.

So I think once we get an actual look at the demon, and discover what he is capable of, that whole sense of unknowing is revealed too quickly. The part with the cat lady is scary, and when the demon rips off the cops head and starts making out with it. But I think once they are at the police station it gets a little eh...just demons eating peeps and the demon flashing his weird facial flaps. But when he takes Darry it is a little surprising and kind of unnerving because he is simply flown away and there's nothing anyone can do to save him. When all we hear are his screams and the demon sitting at a sewing machine it's just really like....a weird gross feeling.

So all in all it's a bit choppy and the beginning is great but it definitely loses something for me somewhere in the middle, but I can't put my finger on it. Here is the opening scene. Hmmm I guess what really makes the truck scary is the scary horn...oh well.
Buy Jeepers Creepers at Horror Movie Empire

Hey, like your blog. I'm a total horror movie fan, and I have to say, Jeepers Creepers wasn't really impressive for me. Your review definitely sums up what I felt about it.

I have a film blog where I do preview reviews of films that aren't in theaters yet. If at all interested, check it out.
http://movie-juror.blogspot.com/

Thanks! I'll check out your blog

The scary looking old truck is indeed CREEPY, its like a 1940's truck that goes wat to fast, thats why darry says "What is that-the vehicle choice for serial killers?"....I liked this movie alot....better than Jeepers Creepers 2.