The Others: Creepy Old Ladies Always Get a Bad Reputation 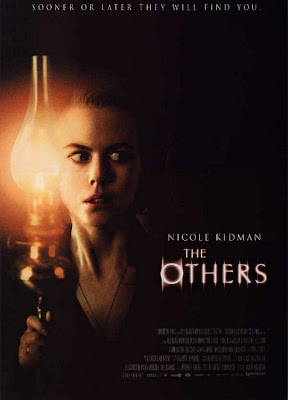 Now The Others has a twist that I can definitely live with. And even though it came along after the Sixth Sense I think it was still just as a surprising if not more. The atmosphere of that huge house and the kids not being allowed to be in the sun, the photographs of the dead people and of course all the old lady scenes really make this movie very chilling and creepy.

For the most part, The Others is your classic ghost story...with a definite twist of course. Nicole Kidman lives alone with her two children and we meet them on the day three new servants report for duty. It is after this that strange things begin to happen. The children claim they hear voices, and they even drew a picture of them. That part in particular really freaked me out because the drawing of the old lady was just...eeeks. A child's drawing is kind of creepy to begin with because it's all you know...squiggly but this old lady was just like some kind of beast. And the little numbers over the figures showing how many times the girl had seen them and the old lady had way more than the others!! Ahhhhh!

Nicole Kidman is of course a non believer. The scene where she is in the parlor or someplace and everything is covered with a white sheet and she starts hearing things and possibly seeing things. And then of course the ultimate creepy scene when Nicole Kidman sees the old lady instead of her daughter but she still talks in her daughters voice. It's just gah, terrifying.

Then when Nicole suspects something is out to get her and her family and runs out into the grounds and finds the three servants' gravestones AND the picture of them all dead. But nothing NOTHING compares to the end and finding out the real twist. I think it's a well done twist because it's not improbable and it's not so far out there. Looking back on the entire movie everything does make sense and like the Sixth Sense, there are all these clues that we ignore when watching for the first time. And the ending does carry with it this sad somber emotion but all isn't completely lost. I just love how the perspective changes in that last seance scene. It's so crazy.

Overall I think this movie is in many ways overlooked. But it's really an unexpected and creepy movie that deserves to be held in higher esteem. At least Bravo agrees with me.