The Last House on the Left: Wes Craven's First Nightmare. 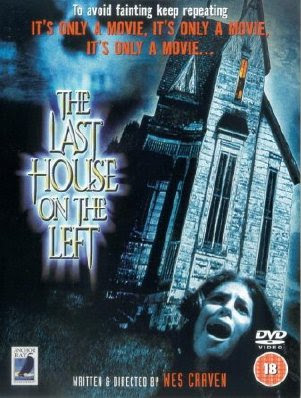 This was Wes Craven's very first film, and it still stands today as a shocking and brutal look at murder and revenge. A lot of people have a severe discomfort when they watch this film and I would say that I can agree (although it doesn't make me as uncomfortable as Cannibal Holocaust). The innocence of the main character paired with the proximity of her house to the crime, and what happens afterwards is pretty unbelievable and extremely unnerving.

Mari plans to go with her friend Phyllis to a concert for her 17th birthday. Her parents are concerned but let her go anyways. Roaming the streets of the city after the concert, Mari and Phyllis decide to find someone who will sell them marijuana and run into Junior. Unbeknownst to the girls junior is the son of one of the escaped convicts the girls heard of earlier in the day on the radio. Junior leads them to an apartment where they are ambushed by the three escaped criminals. Phllyis is promptly raped, and the scene is juxtaposed to Mari's parents planning a surprise party for her.

The girls are shoved into the trunk of a car and taken into the country for further humiliation and violence. As luck has it their car breaks down right outside Mari's house. The criminals take the girls into the woods and force Phllyis to pee her pants. Then they make the girls perform sexual acts when soon after, Phyllis escapes trying to make a distraction so that Mari can escape. The criminals hunt her down, stab and disembowel her. Mari is later shot in a pond and killed.

The criminals decide to knock on Mari's home, and play the perfect role of broken down travelers that are lost. It is not too long before the parents realize that these people have killed their daughter, and the revenge begins...

So obviously what people find most horrific as with most controversial movies, is the rape scenes. Even the peeing in the pants scene. It's all so realistic and choppy in this movie it just gives you this overall bad feeling, kind of like a snuff film. The girls are only 17, and to have all this happened to them only minutes away from one of their houses is heartbreaking. It reminds me of Scream when Casey is stabbed and her parents are arriving. She tries to call out to them but her vocal chords have been stabbed, it's the same kind of heart break. And what do you know Wes Craven is responsible for both of them! Perhaps Scream was a homage to this...hmmm

The disembowelment scene is pretty gruesome, especially for a film made in the early 70s. The criminals are so brutal and so disgusting that what they receive at the end is nothing short of satisfaction. The scene that a lot of people mention over and over again in this segment, is when Mari's mother gives one of them criminals a blow job and then bites off his penis. That is a crime of passion at it's finest. The mother truly wanted the man to suffer and I imagine if I had a penis it would be a terrible way to go.

So if you haven't seen this, I'd say it's worth a try. I say "try" because a lot of people can't get through it. It is very difficult to watch but it's groundbreaking in what it does for horror cinema and it's Wes Craven's debut-so it is rather historic.
Buy The Last House on the Left at Horror Movie Empire!