Single White Female: Don't Read This If You Care About Puppies Dying. 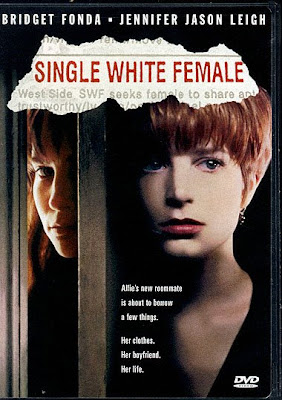 Well the psychos just keep coming. You think you know somebody and then they turn into a psycho jeez louise. This movie, like Misery really kept me on my toes. Although I enjoyed not realizing that Heddy was a psycho right away. And I still can't get over the death of the puppy so I'm just not going to mention it because then I will cry.

Allison Jones kicked her fiance Sam out after she found out he had cheated on her again. She realizes the only way she can hold on to her apartment is to get a roommate. She finally settles on a quiet and shy girl named Heddy with mousy brown hair and no sense of style. After a while the two become close, and then Heddy starts to get way too close. She starts taking on Allison's persona, and Allison doesn't realize in time that her life may be at serious risk.

So Heddy is pretty much really fucked up. Her twin sister drowned when she was 8 years old and has never stopped blaming herself. Did she actually drown her? I wouldn't doubt it seeing as she threw A PUPPY OUT A WINDOW. Sorry. So she has mental problems and every time she gets a new roommate she tries to fill the void of her dead twin. This is why she starts dressing and looking and acting like them so it feels like they really are twin sisters. Heddy of course goes off the deep end when Allison gets back together with her gross cheating boyfriend, and things get a little out of control.

Although I must say I don't entirely blame Heddy. She asked Allison straight up if there was any chance of her getting back together with Sam and Allison said not a chance. I would be pissed off too. But I wouldn't kill a puppy.

So for me the shocker was when Heddy seduces Sam dressed as Allison and then stabs him in the head with the heel of her stiletto. I also loved when she would just creep up behind Allison, and all the creepy creepy things she did. But the best was when she dyed and cut her hair to look like Allison's. Honestly it doesn't get any creepier than that. The ending was great too. The scene in the basement is intense. And it felt so satisfying to see Allison stick it (literally) to Heddy. Serves you right you puppy killing bitch.

This movie definitely makes me never want to find a random roommate that I don't know. Yeah no thanks. Here is the salon scene where the crazy biotch reveals her new look.