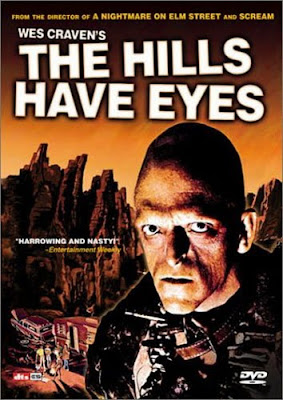 So believe it or not I had never seen the original Hills Have Eyes. I caught the remake on TV one night in my dorm and thought it was fairly decent until the last bit. Watching the original, I am surprised at how true that remake is (except for the end) to the original and it kind of makes me delighted that there are still people out there who wish to preserve what is sacred.

The Hills Have Eyes reinforces the idea that you should never go driving around nuclear testing sites. One thing I do enjoy a little more in the remake is that they play up on that old nuclear testing wasteland thing. The creepy houses with the mannequins, and the hills clan looking more deformed I think works wonders. That is not to say of course that the original hills clan isn't terrifying-because I have never seen a more naturally terrifying person than Pluto. But Ruby pretty much looked like a model except with a bad tooth or two and the mom just looked like that fat lady who dances in Jabba the Hut's palace.

I can only find a picture of her action figure which is strangely kinder in appearance than the real thing. 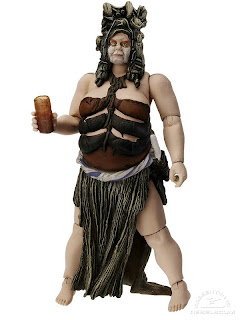 No comparison picture of the hills clan mother exists so use your imagination. Why can I always find star wars look alikes within horror movies?

Anyways, I found the original to be very unsettling. The scene with Pluto and Mars stealing the baby and the women fighting for the baby is so shocking and really disheartening, Mars biting the head off the bird and eating that raw meat...yowzas. Ok ok and the death of the first dog was terrible as well but I was prepared for it and still no animal death compares to the puppy in SWF. There's really such a primal fear going on in this movie and that constant worry about being watched and stranded in the desert. The hills clan is one terrifying family and there savageness is nothing short of what I would expect from the offspring of a dirty hooker and a 50 foot tall grizzly man. The revenge sequences are incredibly satisfying and even though I don't particularly enjoy the company of german shepherds, Beast completely won my heart.

The ending, like the remake kind of gets a little boring for me. It's like the most climatic and the most startling part is in the camper with the women and then after that it's like let's watch Doug chase clan people- it's gets a little old. But that suspense of leading up to the first time we actually see the clan people and when they first attack the camper is crazy. Oh and when they set the Dad on fire...crazy man just crazy.

The remakes second part is much worse than this and I would guess they were trying to spice up the original. But it just made it even more exhausting. Is it possible that the audience is already so exhausted after the camper scene that anything after it will just be boring and too lengthy of a pursuit? Very possible I would say.

So in short, Wes Craven will continue to have my heart as this movie is truly memorable and very disturbing. The gore is there, but it's not excessive. Oh and I almost my forgot my favorite part. The gymnast Bobby does a superb flip routine in the desert! Skip to about 52 second into the clip if you want a good laugh.
Buy The Hills Have Eyes at Horror Movie Empire!

I thought this was far better than the remake