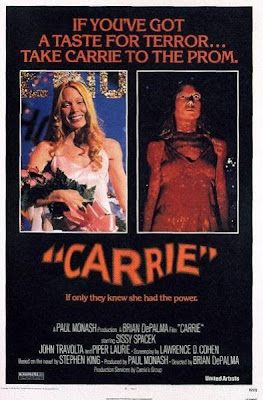 Poor Carrie. I'm not sure where the girls in this movie come from, but if I was Carrie I would kill them all as well. I think a lot of people confuse Carrie as the villain in this movie. But the real villains are clearly these terrible girls and Carrie's mother of course. No one says Jesus Freak like Carrie's mother- that's for sure.

When Carrie misses the ball playing volleyball in gym class they all get angry and walk past her shouting obscenities. Blondie tells her to "eat shit". She missed a volleyball for christ sake. No one can play volleyball. And then she gets her period in the bathroom and they throw an endless supply of tampons and pads at her. There is graffiti on the wall everywhere that says Carrie White eat shit etc etc.... all because she doesn't talk to people? Jeeeezus.

Her mother though. Ack. What a psycho. Raving on and on about how the first sin was intercourse and making Carrie repeat certain Bible verses. Yeah umm I'm not sure if you know this but you had to have sex in order to have Carrie so maybe you should go and take a little time out in the Jesus box while you're at it.

Then there's Miss Collins who is a little too violent with her students. Slapping them, swearing, violently shaking them..why didn't anyone look into her violent streak? Also fatty with the glasses? Carrie gets made fun of and fatty with the glasses walks off scott free? And why does that one girl have to wear that red baseball hat EVERYWHERE. Honestly I'm pretty glad they all died.

So Carrie has telekinesis the ability to make objects move without touching them. Call her a fucked up Matilda if you will, her powers too ignite when she feels a particularly strong emotion. The whole movie leads up to an inevitable prank that will take place at the prom where certain students have rigged it so that Carrie will win prom queen. I'm sure most people know the prank- a bucket full of pigs blood falls all over Carrie. Everyone starts laughing-but are they really laughing or is it in Carrie's mind? Anyways she goes berserk obviously and uses her powers to lock everyone in the gym where they all burn to death. Good riddance.

One of things that creeps me out the most about this movie is all the Jesus iconography. The Jesus Room alone is the scariest thing on the planet, that one doll has those creepy eyes. Then the huge Jesus picture reflected in the mirror that Carrie breaks. There is just way too much Jesus and it may be the scariest part about this film.

I really feel for Carrie and her terrible life. Sometimes I wish she didn't bite it at the end- I wanted her to have a decent life for once. But no she has to get dragged down to hell with her psycho Jesus freak mother. Sigh. Oh well. A great movie nonetheless maybe with the Shining one of the best Stephen King novels to be taken to the big screen.
Buy Carrie at Horror Movie Empire

One of my all time favorite horror films. I agree - Carrie was justified in what she did. And how she did it is definitely a classic moment in horror. This is one of the rare times where the film was light years better than the actual book it came from. Great review and yes... that crucifix is haunting as hell!

The trouble with you people is that you do not know what being frightened truly is, and you have not had childhoods where it's a daily occurrence. I watch Carrie for relaxation for Christ's sake! The book, however, gets a lot closer to the realities and doesn't have any of the comedy or slushiness or the joy and the fun that comes up over and over. By comparison, the evil couple are entertaining, but in the book Chris Hargensen is genuinely evil and the sort of attraction between her and Billy Nolan is based around hell; there are descriptions in which one feels this isn't school at all but Armageddon - and I am sorry to say, THAT is what school life is; there are no good moments and no outs - and in this film, there is a lot of happiness, and trivia that avoids all that. There is no great moral dilemma for Sue Snell, no one great moment where she asks herself what she means by her own popularity and knows that she must atone. Penitence is what she feels, but that isn't registered in the film, not on the level she really feels it, nor do we feel that either.

The paranoia and darkness and sensitivity of Carrie's mind, which actually conditions the entire texture of the book, is simply not there at all, let alone there as an atmospheric constant. It's an easy watch - I'd remake the film in fact - I know it's good but it is not horrible enough.

I want vengeance and vindication. I want the very meaning of 'wormwood' and 'Ichabod' inscribed on people's brains.

Give it to me.

P.S. I spent hours trying to work out how to create page breaks and I still can't do it so you'll have to put up without it unless someone gives me a lesson.

Nearly tend to forget this film. Thanks for making me remember this movie. I really appreciate the filmmaker of this movie.

John Travolta is really silly in this flick.
I like the story Stephen King tells about watching the film in the theater. As he tells it, two black guys at the front, big dudes, went nuts at the end when Carrie's hand pops out of the grave, during the dream sequence that girl has. And one said to the other "that girl ain't never gonna be right again!".

One question never answered is this: is Carrie's telekinetic power Satanic as her mother believes. Or is it an unkown natural ability which only a very few people have? Real telekinesis can only move light objects and dont have the awesome power which Carrie has. Chris Hargensen and Billy Nolan are extremely evil and despicable yet there are many couples like this in real life with the only difference being that they dont go around ruining someone elses prom. Its a pessimistic view of human nature. The religious fanatic mother is also unpleasant and unlikeable. Its a depressing story.

As everyone who doesn't live in a cave in the middle of nowhere knows, 'Carrie' has been remade - or rather "reimagined" - yet again, this time directed by Kim Pierce (Boys Don't Cry) and featuring the ubiquitous Chloe Moretz (I do like her, but has there been a movie in the last five years that she isn't in?)in the title role, and of course, the haters are crawling out of the woodwork to tell us how much it blows and how inferior it is to Brian DePalma's version.

My question is why? Sure, DePalma's version is more stylish - it's DePalma, after all - but in my humble but honest opinion, both versions fail to capture the true point and spirit of the novel, so what's the real difference? I'll agree that Pierce's remake is rather pointless, given that it's little more than a scene for scene reshoot of DePalma's less than faithful version, right down to Margaret White's demise by kitchen utensil - which is NOT how it went down in the novel. Based on the pre-release hype, I was hoping for a bit more King and a little less DePalma, but is "Carrie 2013" truly, objectively that much inferior to the 1976 version? I don't really think it is.