The Skelton Key: Has The Serpent and the Rainbow Taught You Anything? Don't Mess With Voodoo Kate. 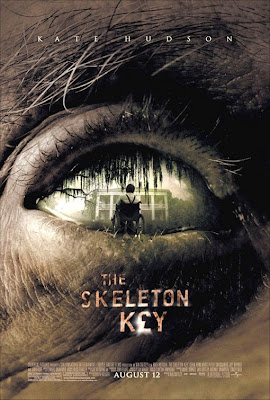 The Skeleton Key is one of those movies where there are a few solid moments of fear but the ending makes you so angry that you completely forget the movie almost was an OK one. Kate Hudson plays Caroline, a nurse who is hired to take care of elderly man named Ben, who had some kind of mysterious accident in an attic of an old New Orleans home. The man cannot speak or walk and there are no mirrors allowed anywhere near him. Caroline's friend warns her not to take the job citing old voodoo superstitions but Caroline doesn't believe in it and puts the strangeness aside to begin her job.

Caroline receives a skeleton key from Violet, the man's sill functioning wife, so that she can open any room in the house. Violet warns her not to go in the attic however, but of course Caroline's curiosity gets the better of her. In the attic she finds an array of dolls, spells, and potion jars. She later asks Violet about the history of the house and Violet tells her the attic room belonged to two slaves of the first family to live there; Mama Cecile and Papa Justify. They practiced voodoo, and one night during a party at the house the guests caught them performing spells with the two children of the house. In a mass outrage and hysteria the guests hung the slaves, and their souls are rumored to be hiding in the house-especially in the mirrors, hence why no mirrors are allowed.

So the few scary moments are when Caroline braves looking into a mirror and sees some kind of shadowy person type thing, and the attic room is a little scary, plus a blind person at a gas station causes a jump or two. But then things start getting nuts. Caroline finds a sheet that Ben, the old man had written "help" on. She soon starts to believe that Violet may be harboring some evil tendencies and is the one responsible for Ben's condition. With the help of Violet and Ben's lawyer, Caroline tries to figure out the truth. One night she decides enough is enough and tries to break Ben out. Unsuccessful in her attempts she is soon cornered by Violet and surprisingly enough, the lawyer.

Now the ending twist is pretty insane. Violet breaks her legs and somehow crawls up to the attic anyways where Caroline thinks by performing a certain spell she will gain safety. Turns out the spell she is using is just the one Violet wants. She throws a mirror at Caroline that has Mama Cecile's picture reflected in it. By not believing in the power of voodoo, Caroline is suppose to be safe. The mirror crashes against her and she falls down.

She then slowly rises reaches for Violet's cigarettes and lights one. The spirit inside Violet has been successfully transferred into Caroline. And it's not Violet- it's Mama Cecile. The lawyer is actually Papa Justify who was previously inside Ben. Violet/the real Caroline is now rendered as helpless as Ben and the two are carted off in an ambulance. Mama Cecile and Papa Justify talk about how much harder it is getting to find new bodies and Cecile rants about how next time she wants a black woman, well, beggars can't be choosers I guess. And then the movie ends.

So the kicker in this whole twist thing and what I find to be pretty surprising and maybe a little bit creative, is that the story of the two slaves told by Violet, has a very different outcome than what we had previously thought. The guests and mother and father of the party had actually hung their two children, while Mama Cecile and Papa Justify were safely inside the children's bodies. That's pretty depressing. So the house has always been in the possession of the two slaves, just not in the way we had thought. And the real reason no mirrors are allowed are because they would be revealed.

It's an interesting concept, but I have a real problem when a movie ends in total helplessness. Caroline was a great and strong character, and to have her just be wiped out with a mirror like that is pretty disappointing. This is where I think twists endings are a bit bothersome. They tend to erase an entire movie's purpose. It's like reading a story when you find out at the end that the whole thing was a dream- it's a waste. And although this twist isn't as insane as some of the other ones I still think it is more detrimental because of how the ending and Caroline's demise is handled. She wasn't suppose to believe in any of it! So why is she so easily overcome by it all in the end? The ending just isn't justified for me. It's not a terrible movie, but it's not entirely satisfying, and that's what it's main problem is.

Here is the part where Violet explains about the house's history.