Halloween: It's Not Her Fault If Tall Guys That Wear Their Glasses Over a Sheet Is a Turn On 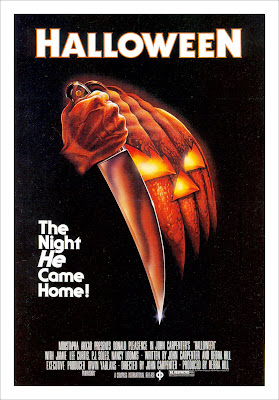 Halloween is another one of those movies that is constantly regarded as an ultimate slasher movie. Popular to contrary belief there is practically if not no blood throughout the movie. Like Texas Chainsaw Massacre it remains one of the least bloody horror movies and yet it still scares the jesus juice out of people.

What I find to be the most bone chilling in this movie, is Michael Myers' silent killer attitude. Those scenes where the kids look out the window and see him just standing on the other side of the road, and then the next minute he disappears are so creepy. Michael Myers acts like a ghost which is pretty hard to do for such a big guy who breathes heavily under his plaster mask. Which reminds me...how can serial killers that wear masks see anything? If you have ever put a mask on and tried to run it's pretty much impossible. No Peripheral and no real idea what is underneath you. How these killers can ever be so smooth and quick on their feet is beyond me.

Michael Myers is especially interesting because of his backstory. He isn't supernatural- although he survives that fall at the end but he still wasn't burned or drowned in a lake. He obviously has some issues and issues that started at a very young age at that. An escape from an insane asylum is also one of the things that makes him even scarier. Lunatics that you don't know are crazy until getting to know them understandable....but lunatics that have always been lunatics and are now on the run.... yeah you better watch out.

The story line is classic. A murdering lunatic killing people on Halloween. Halloween is a scary time of the year anyways and now letting this guy run around during Halloween forget it. By the way does anyone trick or treat in this town? What a lame Halloween.

So of course the key scene for many people is when Hoey McHoster is in bed and thinks her boyfriend is being silly wearing a sheet. That Michael Myers he is just so silly! I think it's funny that he puts the glasses over the sheet, because let's face it you can't see anything under a sheet in the first place so I really don't think glasses would be a huge help there. Anyways that girl is annoying and has lame boobs so no one really misses her that much.

Then the part with Jamie Lee Curtis in the closet and when she stabs him in the eye. Then everyone thinks it's okay the babysitter stabbed the murderer in the eye, he's dead when DUN DUN DUN Michael Myers slowly rises behind! Of course he isn't dead. He doesn't need his eyes! And then the music gah. On Bravo, John Carpenter says that he thinks the music is more terrifying than the movie. This may be very true as that little tune makes many people throw up their arms and quit from pretending they aren't scared. But the other good thing about this movie is the lack of conventional scare tactics. There aren't a whole lot of let me bend over the assumed dead killer and BAM OMG HE'S NOT DEAD SCARY MUSIC moments. Which as I've said before allows for true and genuine terror and fear.

The movie is groundbreaking and other than being a perennial Halloween night favorite movie rental, survives as one of the most well known and iconic horror films to date. I have yet to see the Rob Zombie remake but when I do I will enlighten you on my opinions.

BUY Halloween on BluRay at HorrorMovieEmpire.com!
Posted by Andre Dumas at 4:06 PM

Hey,that annoying girl was pj soles, and she was the girl in the ball cap in Carrie!

This film is Carpenter's masterpiece. Everything functions properly to create a foreboding atmosphere throughout. I watch it every Halloween. (I have no use whatsoever for any of the sequels.)