The Ring:I Mean Let's Face It- Samara is a Great Artist. 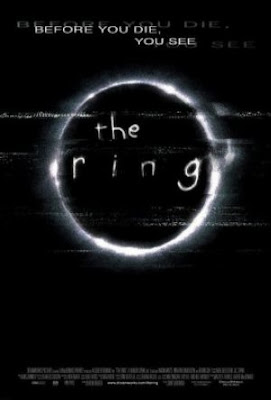 Some people like to think the Ring is a boring horror movie because there are no stabbings and blood or whatever. Personally I think blood isn't a necessity. What's important is the fear that you feel while watching it. And when I watched this I definitely felt some fear.

First off as many people know it is a remake of a Japanese horror film Ringu, which I plan to see sometime soon. We begin with talk of a video tape that kills you when you watch it- but not for 7 days. Naomi Watts' niece apparently dies from this, and her mother wants to know what really happened. Little by little she tracks down clues till she comes across the story of a little girl named Samara. We eventually find that Samara has a special power allowing her to project pictures onto things like film. Not really sure how that works but oh well. Oh right and Naomi Watts watches the video so she only has 7 days to figure this shit out. Will she be able to prevent her own death?

So what I think is really great about this one is that it is very mysterious. We follow the clues that Naomi Watts follows and try to make something out of it. But no matter how many times I watch this, the fly that gets rewound on the screen and then is able to be picked up by hands still confuses me. I guess I just have a hard time figuring out how Samara imprints things the way she does. Oh well someday I will understand I suppose.

The film is very dark and very kind of..green/blue tinted-which adds some extra creepiness. The actual video is very scary because you have no idea what it is, or know why it could possibly kill you. How do these people die, what will happen in 7 days?? What is the ring? So many questions arise and the answers that we get at the end are very thrilling and satisfying.

There aren't that many really scary parts except for the end of course. But there are a quite a few shocking moments. The hand that grabs Naomi Watts in her kind of dream sequence. When she chokes on the water and pulls an EKG like pad thing out of her throat (still don't get how that happens), when Samara's father kills himself, Samara's video footage from the hospital, finding the barn with the really tall ladder, and finding the well at the end.

There's just something about how the movie ends that is truly terrifying. Maybe because Samara can never really be destroyed and the idea of something coming out of your TV set....yikes. Although a few people would argue that what is coming out of our TV sets does kill us but they can stuff it.

Oh and the horses part....sad day sad day. All in all though, a great movie that has one of the most spectacular endings in horror movie history. We think it is over and that Naomi Watts' character has saved the day, but oh no, she only made it worse. Way to go. Here is the scene. I will always continue to be scared of the snow on the TV now thanks to this movie.
Buy the Ring at Horror Movie Empire!

I have to say I disagree! I did not find any part of this film frightening, and while there were a couple of minor jumpy moments, I was let down. The scene towards the end where Samara crawls out of the TV was laughable, instead of crawling out with slow, jerky movements, she pretty much flops out, ruining the tension that has been set up by the slightly creepy walk nearer to the camera.
Despite this I do have Ringu in my watchlist and hope to be impressed!