Rosemary's Baby: Those Castevets' Can Really Hook A Devil Up 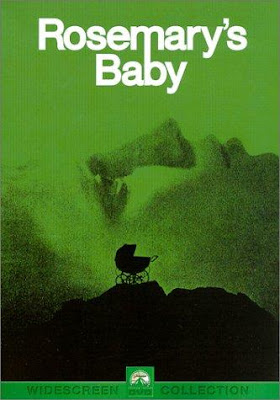 I love love love this movie. From the very first sound of that awfully creepy and innocent song at the beginning something just makes you feel on edge. The creepy next door neighbors, unscrambling the clue from her friend, and the feeling of never knowing who is really in on the plan is quite disturbing and extremely effective.

Rosemary has moved into a new apartment with her actor husband Guy. Guy clearly sucks at acting because he can't land a role to save his life. They soon meet their strange next door neighbors the Castevet's who seem just a little too kooky for their own good. But how can you really suspect a crazy old lady who is just a little too heavy handed on her makeup? It's okay, Rosemary didn't suspect her either because she pounded those shakes like nobody's business.

So one day Guy magically gets a role because the original actor went blind. He then suggests they try to have a baby. Here we have dream sequence. Filmed in such a way that it is a dream and that we have no real idea what is going on. Although it's pretty easy to understand that Rosemary's getting pounded by the devil. The images of the devil however switch back and forth between the devil's face and Guy's face. And the shots of the claws scratching Rosemary's body and the blood is really superb. The next morning Rosemary does in fact think she was dreaming but then finds claw marks on her body. Guy apologizes for being too rough last night. OK. Number 1. Rosemary you had a dizzy spell and pretty much fainted last night. Number 2. Why are you okay with the fact that your husband got "rough" with you after you fainted? The girl means well but really she can be just too oblivious and naive sometimes.

So what do you know, Rosemary is pregnant. The Castevet's recommend a doctor, and Mrs. Castevet blends up some shakes. Rosemary constantly feels abdominal pain and craves raw meat, but nothing to worry, the doctor says. OK number 3 Rosemary pick up a friggen pregnancy book and see if it says you should be craving and eating raw meat...yeah I don't think so. Nice try doctor.

Rosemary soon, although not soon enough in my opinion, catches on to some things. She no longer drinks the shakes, and soon learns that Roman Castevet is the grandson of a known devil worshipper. Things only get worse from there and it's sad to say they never do get better.

So what I love about this movie is that there is no happy ending. Sorry to spoil it but in case you haven't figured it out, Rosemary eventually gives birth to the devil's son. That ending scene when she looks into the bassinet and screams about his eyes is pretty sad, and we never really get to see what the little devil (haha) looks like. Then all the devil worshippers tell her she must be his mother and I think it's pretty safe to say she has to give in. It's that special bond and attachment thing I guess. Poor Rosemary.

Guy is for lack of a better word, a complete asshole. You agree to have your wife raped by the devil so you can get an acting role? What a douche bag. And those Castevet's....man who knew old people could be so terrifying. When Rosemary is in her apartment putting together scrabble tiles I think, to unscramble the name Roman Castevet, it's so thrilling and terrifying. Get out of the house Rosemary you are living amongst devil worshippers! And how Mrs. Castevet is always ringing the doorbell and always coming over and forcing Rosemary to drink or eat something. And then when she goes to her old doctor and pleads for help he goes and calls Guy and the devil worshipping doctor to come get her. Oh yes pregnant women are pretty crazy indeed. Bah the whole not anyone believing her thing and no one being on her side is so heartbreaking and extremely frustrating. Those moments of complete control by the devil worshippers are so suffocating and scary.

It truly is a fantastic movie as it extremely well done and never over the top. There is little blood and it really can stand alone as a great movie and not just a great horror movie. Definitely see this one if you haven't.
Buy Rosemary's Baby at Horror Movie Empire!

One of the greatest exchanges in horror movie (and novel) history:

"What have you done to his EYES?!"

"He has his FATHER'S eyes."

Great review!
What makes this such a great horror is everything is so subtle. If it was made today we'd see the devil raping Rosemary and nothing would be left to the imagination. I just love how everything is just bubbling below the surface.
It makes it truely creepy and many modern horrors can learn from it. Sometimes the unseen is scarier than the seen.
I think Paranormal Activity is agood example and creeped me out me big time. Rosemary's Baby has that same effect.
And you are right, it is a good enough film on its own without being in the horror genre alone.

I was sucked into this movie from start to finish, which rarely happens to me with such an old movie.

Well, ALMOST start to finish. I have to disagree with you saying the film never goes over the top; the "HAIL SATAN!!" part was a bit much, I think.

I almost wish I had watched this without knowing a thing about it. Unfortunately, I was doing a search for movies where the bad guy wins, and this one came up. So I pretty much knew the ending ahead of time. Ahhh well.

Rosemarys Baby proves that the Devil rules the world and not a loving God. Anton Laveys Satanic Church came out when the novel of this movie was being written by author Ira Levin. Rosemary and Guy hear chanting next door to their apartment. Satanists are living right across the wall from them and conducting sick rituals. When Rosemary is raped by Satan we see a human looking face with animal eyes and claws. The Satanist Anton Lavey claimed to play the role of Satan while others say Satan was played by actor Clay Tanner. Satans face looks like guy who was played by actor John Cassavettes. Theres some offensive dialogue such as "God is dead." I remember in 1985 when this movie was televised that warnings to viewers were given about the offensive dialogue and viewer discretion was advised. There is no viewer discretion about the offensive dialogue nowadays. Rosemarys Baby the movie is very similar to the novel.