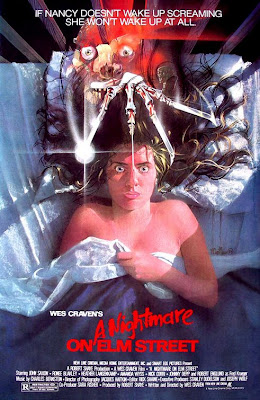 Freddy Krueger may be the best dreamed up character out there. He doesn't amble around slowly with a dumb mask, and he's not a made up monster or a possessed animal or a crazy girl who kills puppies. He is a guy who can kill people in their dreams. And it's impossible not to dream/sleep so he really is pretty darn perfect and effective at that.

The film begins when a girl named Tina is having a dream. She's walking through a steamy boiler room and sees a goat. Don't get any ideas this isn't a porn it's a nightmare! Freddy pursues her and she wakes up screaming. She notices her night gown is ripped in slashes where Freddy's knife fingers had gotten her in the dream. The next day Tina talks to her friend Nancy and discovers that they both had the same dream last night. That night the teenagers have a sleepover at Tina's. Tina's rebel boyfriend Rod comes over and goes to bed with Tina in her mother's room. Tina has another bad dream and wakes Rod up with her screaming ad thrashing. Rod watches in horror as Tina's body starts being cut opened and drag onto the ceiling by an apparently invisible person. Rod flips and runs away, leaving the police to think he is guilty of Tina's murder.

Nancy is determined to figure out what happened. She makes the connection finally between the bad dreams and Tina's death. She then makes the brave decision to not sleep but it proves too difficult. Nancy must find a way to survive in her dreams or risk being killed by Freddy.

What is great about this movie is the thin line between dreams and reality. Freddy may be in their dreams but he can kill them in real life. That is a pretty powerful advantage. The line is so thin that at times we think we are following Nancy in her day to day consciousness when suddenly we find that she is dreaming. One of the greatest examples is when she has the dream where she goes outside and Freddy appears on the road and his arms stretch out like an evil stretch armstrong. Then there is also the bathtub scene, which is especially frightening because when Nancy is pulled underneath the water she is suddenly in a deep body of water and no longer the bathtub.

This also happens to be Johnny Depp's very first movie. He plays Nancy's boyfriend and just doesn't take this whole not sleeping thing as seriously as Nancy. One of the most famous scenes is his death scene and I must say it is pretty awesome although...there does seem to be a little too much blood for one little Johnny Depp.

I also enjoy the scene where Nancy's mother takes her to the sleep clinic to figure out what's wrong. They watch her on the monitor and once she goes into REM her heart rate is off the charts. She begins wildly thrashing and her mother and the doctor rush in. Nancy's hair has turned white and she's clutching Freddy's hat in her hand. A hat, that even has the name Fred Krueger sewn into it. I wonder if he does his own sewing? Anyways, later, Nancy's mom brings her down to the basement where she takes a small bundle out of the furnace. She tells Nancy about how a while back there was a child murderer named Fred Krueger who used to take his victims to an old boiler room and kill them. He managed to kill about 20 kids before the parents of the community became outraged and decided to burn him alive in boiler room. Lucky for Nancy's mom, she got to keep his knife fingers, which she believes is proof that he can't come back and kill Nancy. But of course he can. And also why would you ever keep a child murderers knife fingers? Sick.

Freddy is a great character, probably the best slasher movie villain to date. He's witty and mean, and has such a gross face that he doesn't need a scary mask. He also likes to wear stripes and a stylish hat. What's not to love?

Here is Johnny Depp's death scene or the geyser blood effect as I like to call it, in all of it's glory. Enjoy.
Buy Nightmare on Elm Street at Horror Movie Empire!