The Game: I'd Say It's Pretty Safe To Assume That When Sean Penn Is Your Brother, Nothing Good Will Ever Come Of It. 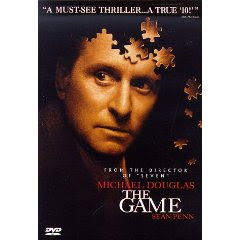 So I've been intrigued by this movie since first seeing it on Bravo's list. That scene with clown really made me excited- and not just because I'm obsessed with Killer Klowns from Outer Space but because finding a clown statue faced down in your driveway in the same position as your father's post suicidal jump may possibly be the scariest and most upsetting thing in the world. Turns out everything you need to know about this movie and end up caring about it, is in the title.

It's called the game. Because well- it's a game. Sean Penn, uber creepy brother prototype, gives his more attractive and sucessful brother a strange present for his birthday. A card from CRS which stands for Consumer Recreational Services. Michael Douglas is beside himself. Why would he accept a weird birthday gift from his permanently cracked out looking brother? Michael forgets about it for a while until he one day happens to come upon the building where CRS is located. He takes a little trip up, takes some extensive psychological tests and fills out a hundred forms and then is sent home. He is soon notified that his application has been rejected. Rejected? In your dreams Mikey. The game has only just begun.

Upon returning home he finds a "person" in front of his house in the same position his father was after committing suicide after jumping from the roof. When Michael Douglas turns it over it's a scary clown faced doll-which he takes promptly into his house and sits it on a chair in the living room. OK first of all if that was me that clown would be in the trash or at least with a Chewbacca blanket over his head. Although I suppose that solution doesn't really accomplish anything... 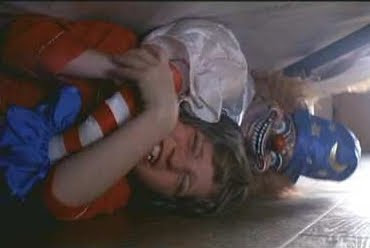 Oh well. Fuck creepy clown dolls. But Michael is ruthless apparently. Soon the man on the news starts talking directly to him and he finds out there is a camera in the clowns eye. He also finds a key from CRS. So now the game is officially underway.

So pretty much, Michael Douglas is endlessly chased and tormented by this so called "recreation" experience. His house is robbed and vandalized apparently by the same black light gang in Batman Forever.....who were also kind of scary skeleton clowns...hmm.... coincidence? Michael Douglas is also drugged, put into a burial chamber in Mexico and all of his money is taken. What a fun game!!

Skip to the end where a stressed out and hopeless Michael Douglas has a gun on the roof and is threatening to kill someone. The door opens and in walks the CRS gang with birthday hats! Those animals. Sean Penn is in the front and Michael Douglas shoots without looking. Blood seeps out from Sean's lovely white tuxedo and Michael is so ashamed he jumps off the roof, crashes into a beautiful glass ceiling and lands on a gigantic black mat. Some men help him up and then Sean Penn walks into the room with a new bottle of champagne and everyone starts applauding. The game is over and apparently it has been the most exciting game ever. Michael Douglas smiles and all is forgotten.

So my main problem with this movie was that I wish it wasn't actually a game. I think Sean Penn really should have died and Michael Douglas should have thrown himself from the roof. When everyone started clapping and Michael Douglas was all happy all of a sudden and shaking everyones hands and what not, it was just kind of stupid. It was quite alarming how good these people were at ruining other people's lives though, and it definitely made me paranoid.

One thing is for sure though, Bravo was right about this scariest moment-it sure is creepy but I wasn't creeped out by anything else. The paranoia stuff is a bit scary I guess but the ending completely erases any feelings of insecurity and just makes you laugh. Michael Douglas is like haha the part where you drove me in a taxi into the San Francisco Bay and I had to escape before drowning?- what a rush! I just don't buy it. Watching Michael Douglas attack psycho women who love him too much is far more interesting.

I love the use of the picture of the scary clown from Poltergeist here. "You got bit???" mwhahhaa

This blog kicks ass---I don't even like horror movies and I sort of kind of want to see some of these movies. Congrats! Love you!