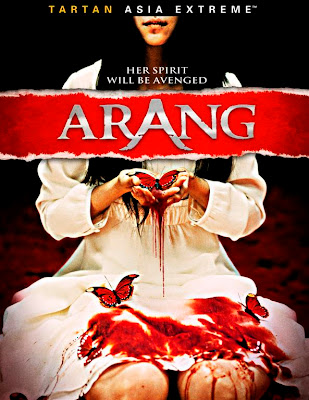 I'll be honest. The only asian horror movie I've ever really seen is Audition. But not to worry-I have an extensive list on my Netflix queue. Today it notified me that the South Korean movie Arang was available to watch instantly on my computer...woohoo! So in I settled only to be confused until the very last reel.

It could be a matter of translation and important plot points being overlooked, or because I just didn't get it, but the movie was very confusing and I still don't get it.

A woman dectective returns to the force after a suspension and find she is paired with a klutz of a young partner. They begin investigating murders where all the victims lead back to a woman that had been missing for 10 years. They soon find a tape inside a dogs stomach and watch it to reveal the victims raping the lost woman. A cigarette, a twist and a few strange sequences later we find that the klutz partner is responsible for the murders and that he used to be in love with the missing girl. The boys forced him to video tape the rape so he killed them.....And then some police officer covers it up for some reason and leads the girl to the salt storage place and buries her in the salt killing her and apparently her unborn child. I don't get it at all. There is more to the plot but it just sounds stupid when I try to explain it.

There is the standard dead looking long dark haired killer in this movie who has scary eyes and appears to her victims before their deaths. That much I picked up from the IMDB message boards where everyone complained that it was a rip off of Shutter. I still found the images of the ghosts to be scary but not that scary. There was one part where one of the victims was in a car wash and you just knew the ghost would pop up under one of those giant car washing things and that was pretty scary and another part where just these white hands with bloody nails with scaling the desk and that kind of freaked me out-but other than that it was mostly like Where's Waldo except...where's creepy long haired asian ghost killer...woman. And while I think about it car washes are VERY scary. It's so quiet inside the car it's extremely eerie..

I just don't understand why the cop killed the woman or why he decided smothering her in a giant pile of salt was the way to do it. I don't understand the partners real motive or why the victim at the end didn't recognize him when he was being interrogated, there just seem to be a lot of plot holes.

Oh another creepy part is when the emails pop up and the salt shack comes up and the creepy song....it's pretty chilling. But also reminded me too much of the ring and I half expected water to come drizzling out of the computer. Which makes me wonder if Samara's video could be transfered to play on computers....hmm......The Ring 3? Here is a clip. The car wash scene is about 5 mins in. Anyone seen this movie and care to enlighten me?

I don't get it either, who was that get at the end... she killed all 4 guys who raped her right? Plus the police chief and the guy who had a crush on her were killed too. So I wanna know what that little girl meant when she said "4 is too little, and five is too much"

The female cop was raped by some dude before the movie began. The older cop who buried the ghost girl was paid off by the parents of the 4 guys to hush up the matter. The cop arrests her partner and finds the body of the ghost girl. The ghost girl repays her by killing the female cop's rapist in the end.

OOOOOOHHHHHH! That makes so much sense now!