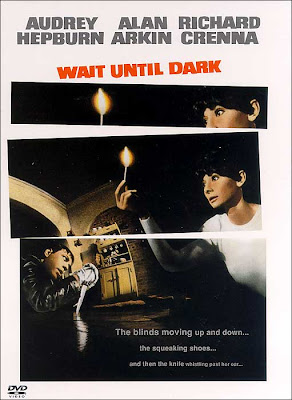 Well after watching this I can confidently state that I can erase being blind from my list of things to try. Audrey Hepburn is amazing in this movie, and the suspense is truly something to be admired.

The film opens with an antsy lady waiting for an old man to sew up a doll. He tells her to be careful before she heads off to the airport. Once at the airport she spots a man in sunglasses waiting for her. Panicking she gives the doll to a man and tells him she will pick it up at another time. The man walks away with the doll in his bag as the woman gets carried away by the man in sunglasses.

Audrey Hepburn plays Suzy a recently blind woman and the man who received the doll- Sam's, wife. Unbeknownst to either of them the doll contains heroin and 3 men are trying to locate it. Once Sam leaves for a trip, the 3 men take action and poor Suzy must defend herself against 3 seeing men. The main suspense comes when Alan Arkin tries to kill her, and Suzy blacks out the apartment to level the playing field and to try to survive.

One of my favorite parts had to be after the men discover the woman from the beginnings body hanging up in the closet. Suzy comes home shortly afterward and the 3 men remain silent while she goes about her daily business. The way she just walks right by the men without knowing it gave me chills. Then she goes into the closet where the woman is now hanging out of the body bag, Suzy's body causing the dead girl's hair to blow a bit. It was really brilliant.

Then of course the ending is just nuts. I was somewhat prepared for the big "jump" moment thanks to Bravo, but I still jumped! And poor Suzy screaming and trying to unplug the refrigerator, the last bit of light in the entire apartment. It really was suspense at it's greatest. I read that when this came out in the movie theater's the cinema would black out certain lights in the actual theater. One by one lights would go off as Suzy smashed and unplugged the lights in the apartment, until the theater was submerged in complete darkness. I wish I had been there for that. I can't even imagine how much more suspenseful it would have been. And the whole time you are just thinking...I can't believe she is blind right now! Seriously, worst ailment to have when thugs are coming to get you. Poor luck I'm afraid. But a great movie.
Buy Wait Until Dark at Horror Movie Empire!

I actually think the scene where Audrey and Gloria make up after having that tiff about the icebox is one of the most magical, charming, entrancing, and genuinely heart rending scenes in the entire history of cinema.