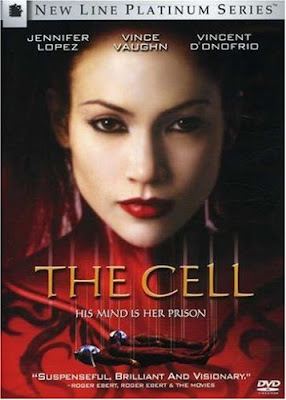 Now, I don't really mind this movie that much. Maybe it's not a great movie, but some of the images in it I think are really great. Maybe if the whole movie was J Lo inside of Vincent D'Onofrio's serial killer mind it would have been better. Who knows.

So J Lo volunteers herself to go inside the mind of this serial killer. It is important they do this so that they can figure out where his latest vicitim is being held. The procedure works for people in coma's and is sort of a virtual reality thing that really isn't very possible but we'll just have to believe it is for the sake of the movie.

Once inside the killer's mind it's like we are immediately transported into some crazy Dali-esque painting. There are these scary broken doll women, and woman in a row with their mouths agape staring at the sky. Then the really scary he-man woman who comes out of the doll scene and takes J Lo to the master of the killer's mind. This is an extra scary version of Vincent's character. He has some kind of alternate personality which is responsible for his angry and violent side and he is quite a scary chap.

Little by little J Lo becomes attached to Vincent, learning things about his hard family life, why he does the things he does to his victims, and why he likes to suspend himself from hooks in his back. If you ask me she becomes just a little too attached and at one point she gets captured by the bad side and Vince Vaughn has to go in and save her.

I think that may be one of the scarier scenes, when Vince Vaughn is hooked up to that thing and his intestine is wrapped around that spiky turny thing....yuck. But it is kind of cheesy when J Lo takes Vincent's character into her mind at the end and she is the virgin Mary pffffffffffffffffft.

So yeah I think this movie's strength is in the artistic pictures that are put on the screen and maybe not so much the story line or the thrills. I find it pleasing to look at, but it falls short of anything truly groundbreaking.You do feel like you are trapped in a serial killer's head though, because everything is so nightmarish. Also I can't really take Vince Vaughn in a serious role it creeps me out almost as much as the giant he-man woman. Here is the first time J Lo goes inside the killer's head. I love the dog shaking off blood and the scary doll girl contraptions.

Hahaha! I actually kinda like this movie for what it is - pretty, but really dumb. I basically went in expecting glorious imagery and almost nothing else, so I was pretty happy with it (also, I didn't pay money to see it). Hilariously enough, when I first saw it with my best friend at the time, neither of us realized at first that Vince Vaughn was supposed to be any kind of law enforcement - we seriously thought for a good two minutes that his character was some hung-over schmuck that just wandered into the crime scene and started bugging people.