Them: When Signs and the Strangers Mate 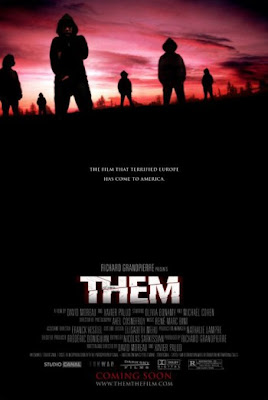 Ok so maybe I'm on a foreign horror movie kick but I have to say, they know how to make a good film. When I say "they" I mean everyone except us here in the us of a. Kidding kidding everyone can make a good movie I suppose but I am continually awed by these recent movies I've seen.

So Them is basically The Strangers kind of crossbred with Signs. A couple alone in a house kind of off the beaten path starts getting some unwelcome company from strange people. These "people" in particular wear hoodies and can move alarmingly fast. They also make weird clicky noises and hoot and holler every now and then AND have flashy lights.

The two main characters are eventually chased out of their home and into an underground tunnel where they must run for their lives.

The film is short- it runs about 79 minutes or so and begins and ends with thrills. This movie is very dark in color and it makes the film even more creepy by doing so. It also relies less on jolting music when something scary happens and more on the fact that it's actually freaking scary that there is a hooded figure standing behind the woman- which I think is extremely refreshing because it lets us feel the fear rather than the crescendo of the music to let us know it is scary.

The identity of the intruders is very ominous and quite terrifying for the most part. Especially the very last scene which definitely gave me some serious chills. Also, the scene where the woman is crawling through the tunnel at the end what suspense and sheer terror! We are right there with her in her distress, anger and fear when she reaches the end.

This movie also like many says it is based on "true events" but like most "true events" it contains little actual truth. It is definitely like the Strangers in many different ways, and although I was more distressed and shaken up by the Strangers, Them made me dislike children and hooded figures- so it did accomplish some freakiness. Definitely checked this out if you loved the Strangers and love those kind of ambush terror rides.