The Devil's Backbone: Who Knew Pickled Fetus Juice Provided a Cure For Impotence? 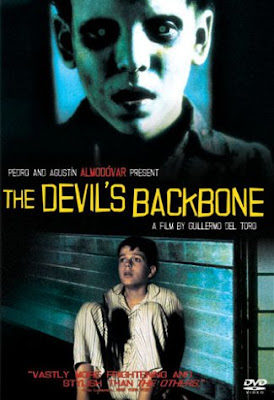 I'm pretty sure Guillermo del Toro can do no wrong. The Devil's Backbone may not be that "scary" or have as many moments of pure fear and shock, but there is something much deeper going on here that I can barely fathom.

Carlos has been dropped off at a desolate orphanage during the Spanish Civil War. He soon learns of a ghost nicknamed "the one who sighs" and starts to have many creepy encounters with it. He soon learns the ghost is named Santi and that what happened to him is a dark secret wanting to escape and be avenged.

The moments with Santi are pretty scary at times. Just seeing him is probably what makes it most terrifying because with a lot of ghost movies it can sometimes take a while for the full body or image of the ghost to make his appearance. Here however we get to see Santi almost immediately. The scene in the basement is great but I enjoyed Carlos' first encounter with him more. Water jugs begin breaking and then Carlos sees wet footprints leading away from the dormitory. The eye in the keyhole was also very surprising and a good jump.

The thing about Santi however, is that I had a feeling he wasn't a bad ghost from the very beginning. I mean come on what has the Sixth Sense taught us? If you talk to a ghost and make nice with it it won't be scary anymore right? Right. So Carlos- who by the way may be the cutest kid in the world hmm...I wonder how old he is. AH he is my age! excellent excellent....ahem Carlos starts understanding this immediately and realizes that talking to Santi is the key.

The film is incredibly moving. Like del Toro's other films I had to fight back the part of me that just wanted to bawl my eyes out by the end. For a horror movie to do that is incredible. Honestly, these are works of art his films. There is so much going on, so much symbolism and duality it just is overwhelming- but in a good way of course.

I absolutely loved the imagery of the dead baby fetuses in the jars juxtaposed with the ending scene of Jacinto and Santi in the pool. And the ending scene was so moving- the boys uniting with their spears....then walking off into the sun at the end. And the doctor watching them go AH! I gets me giddy. The symbolism of impotence is also very interesting especially in regards to the bomb. And then of course the whole idea of what a ghost really is, and the doctor's bookends of his explanations.

So this film is amazing. Maybe not as scary as I thought it would be but incredible nonetheless. Guillermo del Toro may be my new favorite director/writer/producer...heck my new favorite person. If you loved Pan's Labyrinth see this immediately. And if you still haven't seen The Orphanage get on that.