Deliverance: Nothing Is More Terrifying Than a Sexually Confused Hillbilly. 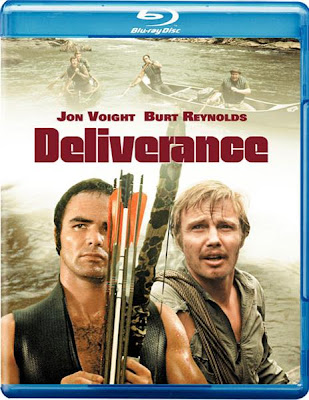 For years as a child I had always confused Misery and Deliverance. I'm assuming this is because I had no idea what either of the words meant so therefore any comprehension of the movies was completely lost. I did know two things that differentiated them...a typewriter and some hillbillies and boy was I right.

Burt Reynolds is basically a crazy bowhunting maniac. Jon Voight is a gentler soul who shies away from killing things...at first. 4 Men take a trip white water canoeing in Georgia's wilderness. On the way to the river they stop at a quaint little hilly billy gas station or maybe it was a town I'm not sure. There was however an extremely creepy looking kid who played a banjo. That kid alone made me feel very uneasy. Maybe because I read that to save costs, the filmmakers used real citizens of the hillbilly town, so I knew that somewhere in America was a scary looking banjo playing hillbilly. Or maybe I'm just discovering a hidden fear for banjo playing hillbillies that look like Jason Voorhees when he comes out of the lake. Regardless...this kid creeps me out and that, is that.

So the men take off, Burt Reynolds shouting commands to poor portly Ned Beatty and the men get a real adrenaline rush. The next morning Jon Voight tries to shoot a deer with his bow, but his hand starts shaking uncontrollably and he misses and hits the tree. Foreshadowing? Perhaps perhaps. The men set off again this time switching partners. Jon and Ned stop for awhile and are met by two hillbillies one with a gun. This is where things get so outrageous and terrifyingly real and gross. The men make Ned Beatty strip and then rape him in the buttocks. Jon Voight is tied to a tree with a belt. After finishing with Ned they head on over to Jon and are about to make him perform what I can only imagine as being the worst blow job experience of all time when Jon sees Burt Reynolds behind the men with his bow pointed at the men. THANK JESUS I never thought I'd be so happy to see Burt Reynolds. Burt hits the hillbilly dead on in the chest and the other runs away. The men are now faced with the decision to either go to the police or bury the hillbilly and pretend it never happened.

In the end they decide to bury the hillbilly..with their hands nonetheless. Drew- the guitar loving friend is enraged and appalled by this decision and acts strange once they get back into the boats. Drew soon falls/ jumps into an upcoming rapid causes mass hysteria and all hell breaks loose. Burt topples down some rocks and one of the canoes breaks. Drew is not found and Burt keeps shouting that Drew was shot by the other hillbilly. But was he really? Doubtful. Jon Voight scales a mountain with his bow and waits for the hillbilly to return. The next morning a hillbilly is at the top of the mountain with a gun and once again Jon suffers his bow fright. Man, I'll tell you, when his hand was shaking and that hillbilly sees him and starts walking with his gun you are just like SUCK IT UP JOHNNY AND FUCKING SHOOT HIM. It's a great scene but I won't go into too much detail because it was pretty surprising.

The movie is an enormous and exhausting adventure. Even just as a viewer by the end I was emotionally a mess. The conflict that Jon Voight faces throughout and what happens by the end of the movie is just draining. The rape scene in the woods is obviously what everyone talks about when they mention this film and it's pretty easy to understand why. Making Ned Beatty strip and squeal like a pig on all fours is maybe just about the most humiliating thing ever. These crazy hillbillies are probably the 2nd most terrifying concept in horror movie history maybe slightly behind the hills clan but not by much. Maybe it's truly terrifying because there are some crazy people like this out there. Or maybe it's just so shocking to see such a manly man like Burt Reynolds become so vulnerable. There are endless things at work in this film and it is certainly a film that will stick embedded in your mind for a long, long time.

At the end of "Dueling banjos" scene, when Drew (the one with the guitar) couln't keep up with that creepy kid's rhythm, he says "I'm lost". I think this line is what unfolds the rest of the movie: four "city-boys" (as one the characters calls them) being lost in untamed territory.

(Sorry for my English, it's not my first language)

Deliverance has three mysteries. How did Drew die? Was he shot by one of those mountain men? Or did he have a heart attack or did he drown or was he thrown against a rock? When Lewis kills one of the mountain men the other guy runs off. Ed climbs a cliff and encounters a mountain man with a rifle. He shoots and kills the mountain man. Was it the same guy who ran off earlier or was this another ruffian? This story illustrates the bestial nature of human beings and theres some similarity to Lord of the Flies. Its horrifying .

This movie is so disturbing because it is one of the only occasions in hollywood where the characters of a thriller film are genuinely stripped down to utter stark realism. The rape scene is so uniquely scary because it feels so real. In real life very few of us are heroes. Men are afraid of the rape scene because it looks like something that could genuinely happen. No theatrics and no sugarcoating of what happens when ordinary people are thrust unexpectedly into horrifying situations. It also seems to get to the core of violence. The ugly nasty dirty utterly repugnant face of violence.

ooooooh....yes, what could be more terrifying. I feel pity for you old-timers if this is what passed for a scary movie in your heyday.

So it's an ass rape scene. Deal with it. You fucking pussies, especially the last guy. "dirty ugly nasty"...you ever seen a korean movie, boyo?