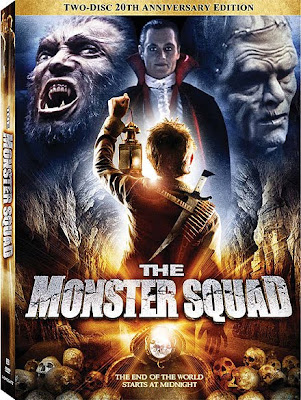 Ah another classic. The Monster Squad is essentially The Goonies but with monsters which makes for an amazing combination and even greater movie. Sean is the leader of a club called the Monster Squad. I'm not entirely sure of it's purpose but I think they just sit around and talk about monsters, invent new ones stuff like that. Then Sean's mom gives him an old diary she got at a yardsale...and guess who the diary belonged to? If you said Abraham Van Helsing you are correct. The diary is in German however so the kids must seek the help of a scary old man aptly named "scary German guy".

While this all is happening Dracula begins rounding up monsters. He goes to Sean's town where the special Amulet is hidden. The Amulet makes it possible for the good people to lock up all the bad monsters in limbo for good. They only get the chance to do so one day out of a 100. The last time it was attempted was with good old Van Helsing who failed. The goodies have to hold the amulet while a virgin recites the magic words.

So Dracula shacks up in the abandoned mansion that Van Helsing had hidden the amulet and the monsters just keep on arriving. Frankensteins monster arrives by plane and befriends the kids. Then comes Swamp thing/ the thing from the black lagoon, wolf man, vampire women, and a mummy. The kids now must find the amulet and send the monsters back to limbo for good.

There are so many amazing moments in this movie all hilarious and all well done in my opinion. The monsters are good times, Dracula has some serious sass, and wolf man really has some problems fitting in. The mummy however ehh a little useless as a monster. Frankensteins monster turns out is a great friend, and he doesn't make the mistake of throwing little girls into ponds.

It's just a great combination of everyone's favorite movie monsters. And while it's a little heartbreaking in the end it still is a classic and entertaining movie. There are great lines like the famous Wolf man has nards scene, there are bullies, funny fat kids- I mean really what could honestly be better?

Hi,
Big, big fan of the blog. Discovered it recently :)
Been really enjoying myself here.
Not to sound ungrateful,but can I just say.... Nards?
What the hell are nards? Surely you mean nads as an abbreviation of gonads (male reproductive organs)
Sorry Im just one of those annoying English people who like things.... proper.
Big D here.

huh?! Nards is what the Monster Squad calls balls. Possibly derived from nads, but it is most definitely nards. Used in a sentence: Ouch, you kicked me in the nards.

Thanks for checking out the blog and liking!