Jacob's Ladder- Anyone for a Refreshing Ice Bath? 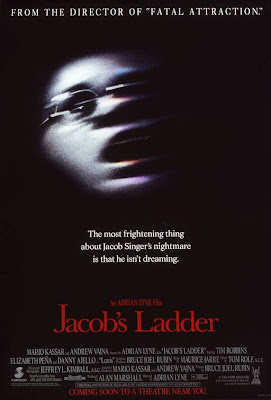 What a mind trip this one is. The first time I saw it I think I caught it somewhere near the end and afterwards, I was on a mission to see the rest of it. This is pre-netflix membership F.Y.I so I struggled for a long time before finding it streamed somewhere online. Finally seeing it was like a sigh of relief and it kept me thinking about it long after I saw it.

During a stint in Vietnam, Jacob's unit becomes under attack and his fellow soliders start exhibiting crazy unexplained behavior. Somewhere along the line Jacob is bayonetted and our story begins to switch time frames. We are now what is assumed to be Jacob's present. He has been married, possibly divorced and his son has been killed. Jacob then starts hallucinating various terrifying images throughout his day. He soon learns about an undercover drug administered to soliders to heighten their aggression. Apparently the drug was given to Jacob's unit who instead of acting out their aggression on the offensive, turned to killing their fellow soliders instead. At the end we discover Jacob has been in Vietnam the entire time. We look down on him just as he is dying on the operating table. Everything we have seen thus far has been sort of Jacob's "life flashing before his eyes moment" or simliar to An Occurrence at Owl Creek Bridge. In other words- it is the definition of a mind fuck.

There are so many startling images and effects in this. For starters the crazy shaking head motion that occurs is so unnatural and inhuman that it is nothing short of terrifying. All of Jacob's hallucinations are equally terrifying perhaps the most terrifying being the party scene where some crazy demon thing is flapping it's wings somewhere and then a giant horn rips through his lover's mouth with no warning whatsoever. It. Is. Crazy. Then being wheeled on that terrible and creepy gurney with that scary faceless doctor with the needle. It really is just incredible.

I love how this movie isn't some throw away ending either. Yes techincally none of this has happened-but what Jacob experiences through these hallucinations are vital to understanding his character. His chiropractor tells him exactly what he is experiencing earlier on in the film and we barely even think about what he has said until the ending...

"Eckhart saw Hell too; he said: 'the only thing that burns in Hell is the part of you that won't let go of life, your memories, your attachments. They burn them all away. But they're not punishing you,' he said. 'They're freeing your soul. So, if you're frightened of dying and... and you're holding on, you'll see devils tearing your life away. But if you've made your peace, then the devils are really angels, freeing you from the earth.'

This quote reminds me so much of Cole's quote from the Sixth Sense in which he is basically, unbeknownst to Bruce Willis, telling him exactly what we will soon find out at the end of the movie. It's really genius and it really makes you think. Jacob was afraid of death and couldn't bring himself to let go of those memories and his past that kept him locked down. This is why the hallucinations are so terrifying because he is fearful and instead of angels-he sees devils. Once the fear is lifted the angels return and he is guided up the stairs with his son waiting for him and bright light ahead.

I feel it's truly a masterpiece of a movie that keeps you entranced from the very beginning and doesn't let you go until the credits. Do not miss this one.

The only clip allowed to be embedded is the trailer, but look on youtube for the gurney and the party scene!

I love this movie. Anyone who hasn't seen it absolutely should go and find a copy. It is not only really scary, but it also makes you really care about Jacob and what happens to him. When he sees his son at the end it just made me want to cry. Def should be higher up the list!