The Blair Witch Project: Next Time I Film a Documentary in the Woods Remind Me Not to Bring a Fat Kid. 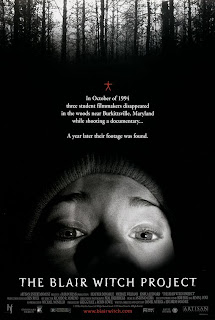 Like Cannibal Holocaust, there was a lot of talk about how many thought the Blair Witch Project was real. Part of the reason for this was probably the studio's influence, as they made a website posting old pictures of the cast-Heather in her prom dress for instance, and clips from newspapers talking about their disappearance. It was until the cast members' appearance at one of the MTV award shows, that finally convinced those believers otherwise.

So in order for this movie to be truly terrifying I think you need to believe for a second that it is real. If you think about the movie like that I think it becomes a whole other level of "scary". Of course even if you don't believe it's real it could still be scary, it really all depends on what scares you.

Although call me crazy, but if anyone was stuck in the woods, lost, seemingly going in circles, having a friend missing, cold and hearing things at night-I'm pretty sure they would be scared. People's main complaints have to do with the shaky camera, no blood, and not knowing or understanding what happened at the end.

For me, the scary part of the movie is the hysterics and the sense of knowing that you are lost. Watching the collapse of the three filmmakers is very interesting. In the beginning, they are really just making a movie and have no idea what could possibly be in store for them. Hearing the stories from the locals about the blair witch are pretty creepy. The one where crazy lady said she saw her, and she opened her cloak and was covered in hair. And then just the little sketches of the witch are all a bit unnerving.

Hearing the weird noises at night are also spooky, because who doesn't hear things at night? But what is really interesting is that no one really knows what that sound even was. Then waking up and finding the rock piles all around the tent, and finding all the scary little stick effigies, it's just very very creepy.

Then the moment where they know they are lost. They had been walking in a specific direction for a long time, when they realized they've only been going in a circle. Then when Josh disappears and they later find his shirt which they unwrap and find some kind of bloody body part tied up in it! Who wouldn't freak out?

Then perhaps the scariest moment in my opinion, is when they find the house. The scary children's hand prints all over the walls, and the very last image we see is a guy standing in the corner facing the wall and then the camera falls.

It may not be your typical horror movie, and it may not be as scary to some as it is to others. But I still feel like there is something about this film that makes me feel uneasy. Perhaps it's the realistic element of the documentary style footage, or the small moments of creepiness, and the hopelessness in the actors' voices and faces-whatever it is, I truly feel that this movie did not disappoint. It achieved a demure sense of horror that is understated and simplistic which is something harder and harder to find these days. Here is the trailer, don't mind the Swedish.
Buy Blair Witch Project at Horror Movie Empire