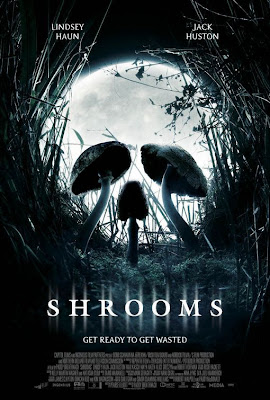 Shrooms is by most standards a pretty bad movie. The twist has been done, the scares have been done. Pretty much everything is borrowed and the only good thing is that the girl from the Disney original movie The Color of Friendship is the lead. Oh and there's a fart joke.

Some kids take a trip to Ireland to meet up with their "irish" friend who is obviously british all in the hopes that they will trip on shrooms. They come to a nice deserted dark and green looking woods where they hunt for the shrooms. The british guy warns them not to pick the ones with the big black spot but the color of friendship girl isn't around to hear that bit of advice. When she does come across one she eats it right away and has a massive seizure.

That night around the campfire, british boy tells a scary story. Blah blah there's an abandoned school where some massacre happened and this guy beat people with a belt and razor blade attached then killed everyone. Pretty standard stuff.

Nothing was really scary at all in this, save for the black cloaked figure which like scary asian girls with long hair will always be somewhat scary. But the main problem is that the twist is pretty easy to figure out. Color of friendship girl claims she has dreams where she knows what happens? Yeah sure. AKA you've been killing all your friends and not realizing it. A lame twist and a terrible exaggeration of what actually happens when you take shrooms plus characters that no one really cares about makes for a pretty lame movie.