Clown Shoes Were a Bad Choice. 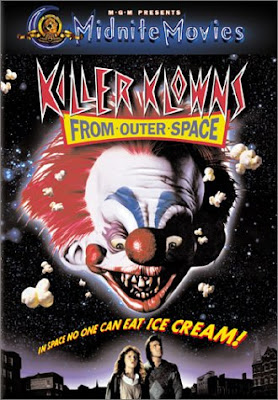 So I am pretty confident in saying that this is my all time favorite cult horror movie. It also may have been the first horror movie I had ever seen. I was maybe 5 and ever since I saw it I've been terribly afraid of clowns and have had numerous terrifying dreams about them as well.

The movie is hilarious. This may be for one or more reasons usually having to do with, bad acting, bad lines, the funny things the clowns do, the unintentional humor, or maybe that it just is suppose to be funny.

It opens with Mike and Debbie trying to make out at the towns local make out spot. While sitting in a blow up raft they see a pretty crazy looking shooting star type of thing. Debbie wants to go looking for it and instead they find a circus tent in the middle of the woods and decide it's too crazy not to go into. Debbie is hesitant, but that kooky Mike really convinces her. When they get inside they discover that this is no circus tent...it's a spaceship! The clowns now make their entrance. If only they had chosen a different earthly character to become they wouldn't have had to deal with those pesky shoes, alas clowns it is and they lose their prey. They do decide to take a nice leisurely walk 5 miles nonetheless, into town though, invading it and taking many or all of the humans for their meals.

So the clowns start showing up and most people are like oh haha it's a clown...even though they are especially scary looking clowns but I guess no one else is afraid of clowns so whatever. These alien clowns have some pretty decent magic tricks up their sleeves. These include zapping people with some kind of gun turning them into a big thing of cotton candy that they later insert straws into and suck people's blood, putting people into giant balloons, popcorn that turns into rabid barking clown heads, and balloon animals that really turn into animals! Oh and pies that disintegrate human flesh! mmmmm

So in general the movie is highly entertaining, that is if you don't take it too seriously. The one possibly creepy part is when the clown uses the sheriff as a kind of ventriloquist doll..hmm now that I think about it that is extremely creepy. The end scene is a little anti climatic although one of my bad dreams did include a giant clown descending from the wall on a string so I guess I can't really bash it.

So do yourself a favor and watch this- you can even turn it into a drinking game if you like. Drink for bad acting, swearing, and everyone can choose a color and everytime the clown with that color hair comes on the screen you must drink. It's a great game trust me.
Buy Killer Klowns from Outer Space at Horror Movie Empire!

OMG! What a classic - I had forgotten about this one. Thanks Andre, I will need to pick this one up.

I absolutely love everything about this movie, almost to the point of obsession. If I'm at a video store or anywhere that sells movies, and I see one that I think is under priced I have to buy it. At last count I have 22 copies on DVD and 7 on VHS. I have posters, the soundtrack, action figures, anything I can find! My nephew is terrified of coming into my theatre room because of all the Klown stuff everywhere. Kinda strange I admit. I just love this movie. Hard to believe these guys never really made another movie. I guess I'll just wait...