Sometimes I Wonder... What Would Veruca Salt Have Done With Her Own Oompa Loompa? 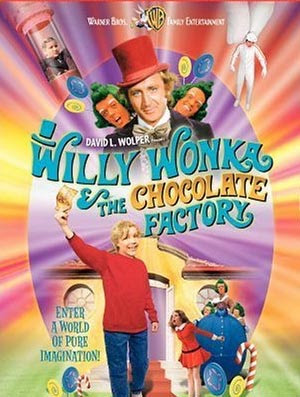 Another movie that is a bit out if place- but Bravo thinks it has a scary moment so I must write about it. This movie is most people's favorite movie about chocolate and midgets because it obviously beats out the creepy lollipop guild in the Wizard of OZ...of course there isn't a suspected hanging munchkin in Willy Wonka but minor details, minor details.

The scary moment Bravo talks about is the tunnel scene, which I will admit did scare me as a young pup. The scary pictures that are displayed on the walls showed bugs crawling on people and chickens getting their heads cut off. Also, Gene Wilder goes nutty and there are flashing lights and shapes, it's a pretty serious acid trip.

While it's not entirely scary and beats out a few of my favorites.....ahem CANDYMAN?! I guess it is on there because of it's impact and how it always stands out as what people remember when they think back to watching it as a child. I still think it's a little far reaching but whatever Bravo. Hmmmm now that I think about it, the Oompa Loompas are very scary. Oh well.