Final Destination: Devon Sawa's Come a Long Way After Flashing His Junk In Now and Then. 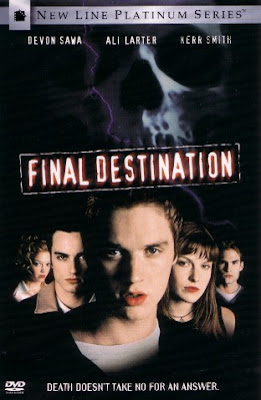 So believe it or not I hadn't ever seen this before today. The only one I had happened to see was Final Destination 2 and I found it unnecessarily gory and cheesy. So I was kind of hesitant to see this...of course sequels are usually the worst way to pass judgement on an original so I don't know what I was thinking.

All in all I thought it was pretty decent. It was much more focused and involved than the 2nd one, and the gore wasn't at such an extreme level that it became comical. The beginning scene wasn't fake head after fake head popping off and it had just the right amount of tension.

I also always thought that all the characters would end up dying but SPOILER ALERT they don't. Although, I could have done without the last 5 minutes. OH and the Candyman was in it which was very exciting for me. I also enjoyed Kerr Smith aka Jack from Dawson's Creek and obviously Devon Sawa, not to mention Stifler and Ali Larter. What an all star cast!

Death, like Freddy, is a pretty decent villain. You can't really escape it and although I don't really buy this if you save someone it skips them pattern business, and how death sometimes covers up it's tracks I still think "death" is an extremely interesting and deep concept for a horror movie villain. Since must horror movie villains are basically death in human form, to have the killer actually be death itself takes it to a whole other level.

The death's are a bit too freakish sometimes, but I suppose that's where the entertainment lies. The close calls are also kind of fun because they make you catch your breath again of course only to get it sucked away in a second or two. I think my favorite death was the teacher's it was the only truly creative one. The others were sort of expected. For instance when Terry walks in the road you know she's going to get hit by car because of that particular camera angel-still being able to see that she's in the middle of the road, so it didn't really shock me.

I didn't see the point of having a severely retarded person on the plane in the beginning, or why the teacher had to be so damn scared of Alex or that his friend's Dad was so angry...I mean yes you lost one son, but Alex saved one of them why can't you be happy you shit.

Perhaps I will write a review for the 2nd one, and maybe see the 3rd one, but I wouldn't count on it. I feel like Final Destination is better off being a single entity because everything else just becomes a way to top the one before with even more freakish deaths and pointlessly fake blood and gore. And yes I know there's a 4th coming out- The FINAL Destination......blah. I'll stick to originals thank you.
Buy Final Destination at Horror Movie Empire

There is a 5th one coming out sometime in 2011, can't they just let the franchise die?