Tamara: I Hope That When I'm Murdered By My Classmates That I Come Back That Hot Too. 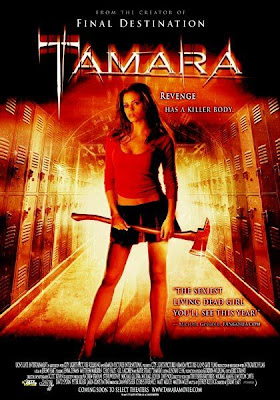 Tamara would be labeled as a "Teen" horror movie- probably because it takes place in a high school, has hot babes in it and lots of gore. What surprised me the most about this film however was the extent of the gore. I can honestly say that there were scenes in this movie that out did many or all of the scenes in any of the Saw movies.

Tamara is a nerdy girl who is into witchcraft and has a crush on her english teacher. When she writes a newspaper article talking about the high school sports team's affair with steroids; the jocks and popular kids take her on. A cruel prank goes horribly wrong, as Tamara ends up dead. After burying her, the students responsible are shocked when Tamara marches into class the next day looking like a hooker and model at the same time.

Tamara soon starts taking revenge- but not in the way you would think. I think that is what separates this film from just another crappy teen horror movie because Tamara's revenge goes much deeper and is more startling than most classic revenge cases. Tamara gets into peoples heads and makes them cause the damage that acts as her revenge. The first instance she controls the mind of the geeky AV guy who sits in front of the camera, broadcasting to the entire school while he cuts off his ear, tongue and stabs through his eye with a box cutter. And let me clear- nothing is hidden here. Even Reservoir Dogs, with it's famous ear cutting scene did not get as close as this scene does. It was pretty difficult to watch.

Then perhaps the most gruesome scene for me (although my fear of vomit probably had something to do with it) was when Tamara made the popular girl start puking her guts out so hard that she pukes up blood and intestines but then changes her mind and makes her eat everything insight-even going so far as to chew through her own fingers.

Then there's also the comedic aspect-making the two jock friends have sex together for instance was great. And then of course gore gore gore! The other notable gory scene includes making her father chew his beer bottles till the glass cuts through his neck ah yes it's pretty crazy.

So while the acting and the characters are sub-par I think the movie really took things to a completely different level. At times it was hard to watch so if you enjoy gore check this out.
Buy Tamara at Horror Movie Empire!